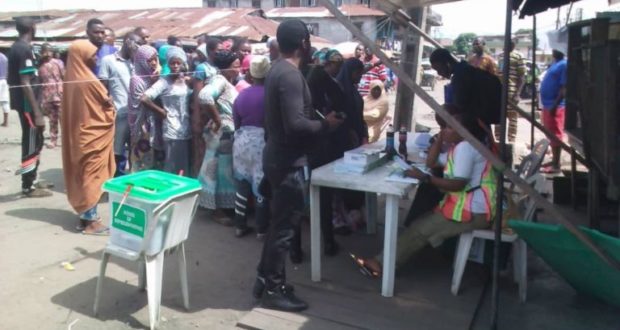 INEC conducted supplementary election in 71 polling units across eight wards of Ajeromi-Ifelodun Federal Constituency of Lagos State for the House of Representatives seat.

The commission had declared the Feb. 23 House of Representatives election in the constituency, inconclusive due to over-voting, non-complaince with the usage of smart card readers and violence.

Prof. Olusoji Ilori the Returning Officer for the election, announced the result for the election at the INEC Collation Centre located at Local Authority Primary School, Baale St. Ajegunle at about 7:35 p.m.

Ilori, who is a lecturer at the University of Lagos, announced the total votes after the supplementary poll.

According to him, Taiwo polled a total of 36,115 votes to defeat his closest rival from the Peoples Democratic Party (PDP) Mrs Rita Orji, who got 32,557 votes.

Ilori said: “I declared that Kolawole Taiwo Musbau of APC, having satisfied the requirements of the law and scored the highest number of votes, is hereby declared the winner and he is returned elected.”

The party agents took turns to sign the results.
Earlier before the announcement of the result, Mr Afred Akpojotor, the INEC Electoral Officer for the council, commended the voters and stakeholders for their patience and perseverance to seeing the end of the exercise