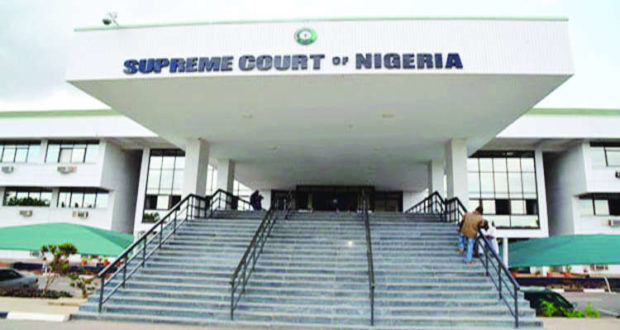 The Supreme Court has rejected the applications by the All Progressives Congress and two others for a review of February 13, 2020 judgment that invalidated David Lyon’s election.

A seven-member panel of the court, led by Justice Sylvester Ngwuta, dismissed the two application filed and argued for the applicants by Afe Babalola (SAN) and Wole Onanipekun (SAN), and held that the applications were without merit and amounted to abuse of court process.

According to The Nation, Justice Amina Augie, who read the lead ruling, said the application was an attempt to make the court violate its rules and the. provision of the Constitution which makes it the final court of the land.

Justice Augie said the applications, if granted has the capacity of belittling the dignity and status of the court and open a floodgate for such request in the future.

She expressed regret that senior lawyers in the country could be involved in the filing of such applications.

Justice Augie awarded N10milion cost for each of the 1st, 2nd and 3rd respondents (the PDP, its governorship and deputy governorship in the last election) – Sen. Duoye Diri and. Lawrence Ewhrudjakpo – to be paid personally by the applicant’s lawyers.