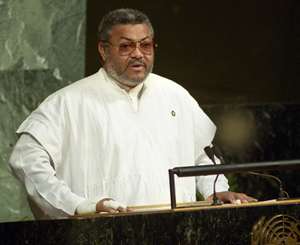 Breaking: The President who reformed Ghana, Jerry Rawlings is dead

It was gathered that the icon died from COVID-19 complications at the age of 73.

He was a military ruler until 1992 when he was elected as a civilian President. He won reelection in 1996.

Reacting to the sudden demise, Dele Momodu on his Twitter page said  “Africa has lost one of her greatest heroes former PRESIDENT JERRY JOHN RAWLINGS (aka Junior Jesus). For me, he was my personal inspiration… May his soul Rest in Peace…