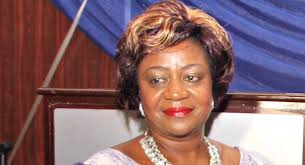 The Nigerian  Senate, on Monday has refused to confirm the nomination of Lauretta Onochie’s nomination as a National Commissioner of the Independent National Electoral Commission (INEC).

The new development followed the report by the Senate Committee on (INEC), Senator Kabir Gaya who said her nomination breaches Federal Character principles.

Kabir Gaya, sited Section 14 (1) 3 of the Constitution, saying that somebody was already a Commissioner from her zone.