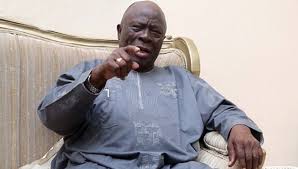 Ayo Adebanjo, leader of Yoruba sociopolitical organisation, Afenifere, has taken a swipe at  President Muhammadu Buhari for his attitude towards governance.

According to him, Buhari is behaving like Roman Emperor Nero who did nothing while his empire was being destroyed.

He made the remark while accusing Buhari of making several anti-people policies.

In a statement signed by Afenifere’s spokesman, Jare Ajayi, Adebanjo said the president has failed to live up to the electoral compromises of the All Progressives Congress, APC.

According to Adebanjo: “This attitude on the part of President Buhari ‘recalls to one’s mind, the story of the Roman Emperor Nero who was busy on the fiddle when his empire was burning’.

“Afenifere not only called on President Muhammadu Buhari to ‘redirect its administration adroitly, we advise his government to embrace democratic ethos immediately by pursuing only policies that are in the best interests of the people.”

He also re-emphasized the need to urgently restructure Nigeria.

“The only panacea to the multi various problems bedevilling the country now is for the federal government to shun nepotism, confront insecurity and Restructure the country immediately.

“The administration of President Muhammadu Buhari has taken measures that were totally against the interests of the Nigerian populace.

“Contrary to the promises made during the electoral campaigns by the President and his party, the All Progressives Congress, the prices of commodities and services have skyrocketed while social services delivery and infrastructure kept receding,” he added.

Previous: State of the Nation: Nigeria has no government, Omokiri laments
Next: PDP will surely take over Osun in 2022, Oyinlola assures