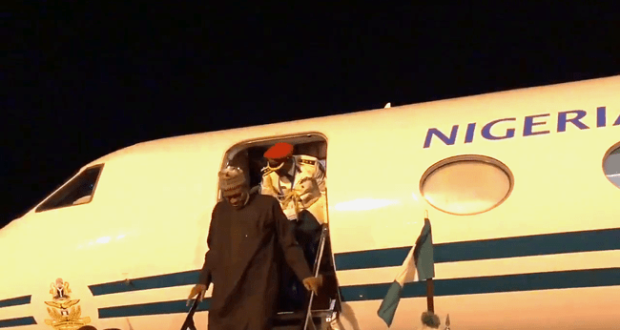 President Muhammadu Buhari has arrived in Maiduguri as part of a one-day official visit to Borno.

The presidential jet on Thursday landed at the Nigerian Air Force wing of the Maiduguri International
Airport at about 10.45 a.m.

The president was received by Gov. Kashim Shettima, his Deputy, Usman Durkwa, members of national and state houses of assemblies,
and some top government officials.

Other dignitaries that received the president were the Minister of State for Works, Alhaji Baba Shehuri, Maj.-Gen. Johnson Akinrouluyo,
the Theatre Commander of Operation Lafiya Dole, heads of security agencies, community and religious leaders.

The president would also pay a courtesy visit to the Shehu of Borno, Abubakar Ibn Umar Garbai El-Kanemi.

The state government had constructed over 40 Mega schools to cater for the over 50, 000 children orphaned by the Boko Haram insurgency.

The schools, designed with e-learning facilities and modern gadgets were constructed in the 27 local government areas of the state.

One of the schools has been named Muhammadu Buhari Academy.