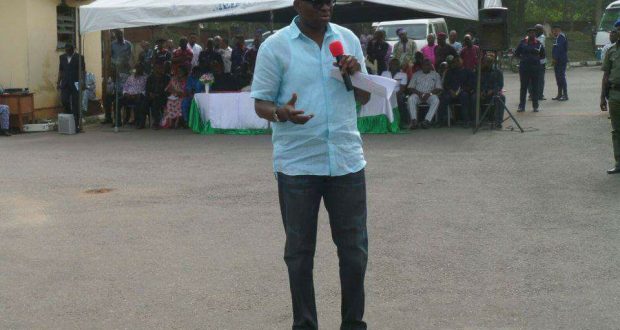 Buhari must stop deceiving himself with his fight against corruption – Fayose

Ekiti Governor, Ayodele Fayose has described President Muhammadu Buhari as the father of corruption in Nigeria.

He was reacting to the President’s refusal to deal with Minister of Solid Minerals Development, Kayode Fayemi and other corrupt officials in his Administration.

Fayose  made this known in a statement by his Special Assistant on Public Communications and New Media, Lere Olayinka.

Governor Fayose alleged that President Buhari is shielding corrupt politicians in his Administration.

“President Muhammadu Buhari must stop deceiving himself with his fight against corruption, Ibrahim Magu was challenged at a function in Abuja on the Commission’s refusal to investigate Fayemi, despite the loads of petitions against him and the EFCC boss could not offer any explanation.

“The reality is that President Buhari is leading a government of scandalously corrupt people and one of them is Kayode Fayemi.

“It is even safe to say that President Buhari is the father of corruption and that has been further established by the attitude of the President towards his men that have been accused of corruption.

“From MainaGate to allegation of award of $25 billion contracts without following due process made against Maikanti Baru by Kachikwu, the DSS indictment for corruption of the Acting Chairman of EFCC, Ibrahim Magu and the alleged N500 million bribery said to have been paid to the Chief of Staff (COS), Abba Kyari by officials of the MTN Telecommunications Company, President Buhari has remained the shield over and above his corrupt men.”

Previous: Secondus has enough experience to lead PDP back to the top – Ihedioha
Next: So what about unpaid salaries, no big deal about Kogi governor’s mansion – Aide