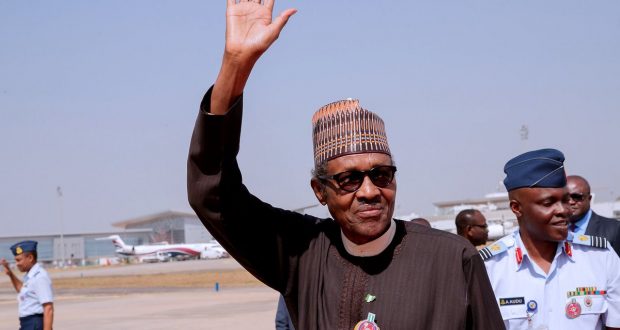 President Muhammadu Buhari has returned to Abuja after participating in a two-day counter-terrorism retreat, co-hosted by Jordan and Nigeria.

While in Aqaba, Buhari met with King Abdullah II of Jordan and they leaders discussed bilateral issues concerning Nigeria and Jordan.

During the meeting, Buhari stressed the need for inter-regional co-operation and information-sharing towards tackling terrorism across the world.

According to him, these factors are important in check-mating the threat of violent extremism to global peace and security.

The president used the opportunity to thank the Jordanian monarch for his constant support and assistance to Nigeria, especially with the recent donation of armoured vehicles and other military equipment to fight terrorism and insurgency in Nigeria.

King Abdullah II advocated broader measures especially the use of cyber security in checking the influence of terrorists.

He pledged the continued support of the Jordan to Nigeria in its war against violent extremism.

Buhari, who also spoke at the counter-terrorism retreat, urged leaders to speak up against the violent extremism committed by deranged people in the name of Islam.

According to him, all nations, irrespective of religion should partner effectively in implementing national, regional and global action plans to counter violent extremism.

He, therefore, called for a stronger collaboration among the member countries of the Aqaba Initiatives to check violent extremism across the world.

Buhari and other visiting heads of state from Ghana, Mali and Guinea-Conakry were hosted to a royal dinner by King Abdullah II.

Previous: Ex-commissioner berates N’Assembly for concealing wages
Next: Atiku: Those who left PDP should return home like i did, it is the only party in Nigeria