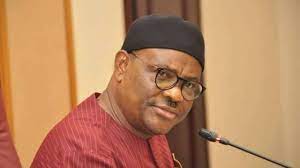 Buhari should have resigned by now- Wike

Governor Nyesom Wike of Rivers has said that  any government that cannot protect the lives and property of its citizens does not deserve to be in power.

He stated this while in Taraba on Thursday  to canvass support of both delegates and party’s stalwarts.

Not comfortable with the alleged manner the All Progressives Congress (APC), under the leadership of President Muhammadu Buhari, is currently handling the security challenges bedeviling the country, Wike said he would have resigned if he was the president.

According to him, “I would have resigned if I were President Buhari. I would have addressed Nigerians and tell them that I have tried my best but my best is not good enough, therefore, I am resigning.”

Wike, who was of the view that “there is no part of Nigeria that is safe today”, observed that “even Katsina, the President’s state, is one of the most affected.”

Insisting that the APC government has done nothing to ameliorate the security predicaments of the country, Nigerians, as opined by him, need a leader that “is truthful, committed and dogged to bring about positive change”.

Speaking, the host governor, Arc. Darius Dickson Ishaku, who has been advocating for state police, said if created, the present security situation of the country would be addressed.

He urged delegates to judiciously make use of their votes by voting for candidates that have capacity and competent enough to ignite the much-needed dividends of democracy to their doorposts.