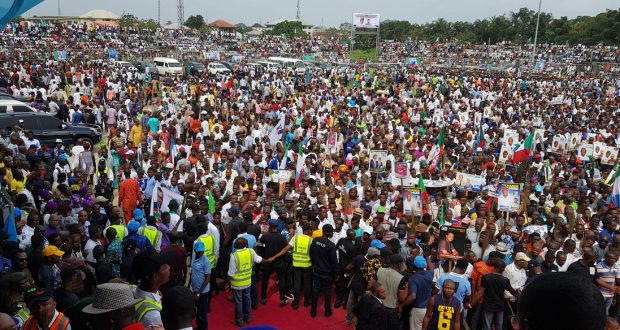 Odigie-Oyegun in Uyo, says Buhari working hard to turn things around for better

The National Chairman of All Progressives Congress (APC), John Odigie-Oyegun, says President Muhammadu Buhari is working hard to make things better, urging all Nigerians to give the needed support.

Odigie-Oyegun, who said this in Uyo on Saturday while flagging off the APC local government election campaign in Akwa Ibom, slated for December 2 stated that : “Your President is working hard to turn things around for better. APC needs people of vision, people with passion to bring about a new Nigeria,” he said.

Odigie-Oyegun said that the APC was poised to reposition Nigeria on the path of progress by sweeping away corruption and the evil of the past.

He said that he was overwhelmed by the crowd at the rally ground, describing it as an indication that the Akwa Ibom people were ready to embrace change.

Odigie-Oyegun, who received formally some defectors from the Peoples Democratic Party (PDP) led by a Senator, Nelson Effiong who is representing Akwa Ibom South Senatorial District, said that APC was proud of the state.

He described Effiong as a gentleman; a man of vision and integrity, who could look into the future.

The APC National Chairman commended the defectors for seeing the new Nigeria which APC had promised to deliver to all Nigerians.

A vision of change…

Speaking on behalf of the new entrants into APC, Effiong, said that he had the vision of change 10 months ago and took the decision to join the party.

Effiong commended President Buahri for taking Nigeria to the promised land and assured the APC National Chairman that the party would win the forthcoming Council election convincingly.

“I assure you sir, that we are here in the party with open mind and we will take the state to the main fold of Nigerian politics in 2019,” Effiong said.