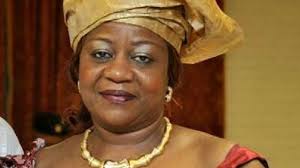 Presidential aide, Lauretta Onochie, has asked members of the ruling All Progressives Congress (APC) to stop repeating some angry statement by the ex-Lagos State Govermor during  campaign for the ticket.

According to her, making reference to those words keeps the wounds fresh, saying many are hurting.

She added that the president’s candidate has begun to reach out to those who contested the ticket with him because Buhari told him to be magnanimous in victory.

She called on party members  to move on, be united and to come on board.

“We too must act as adults if we are going to win everyone back. It’s not right to keep repeating those words said in anger by our leader, Asiwaju. This is because many of our people are still hurting. It’s childish on our part, to keep throwing those words around and keeping the wounds still fresh.

“Let’s move on from those days when the camp was balkanised along lines of different aspirants. We need EVERYONE OF OUR PEOPLE TO COME ON BOARD. Some are reluctant because we are still throwing those words in their faces, constantly.

“Like our leader, Asiwaju himself has done, reaching out to those he defeated, let’s be magnanimous in victory by reaching out in a matured way to everyone we know.