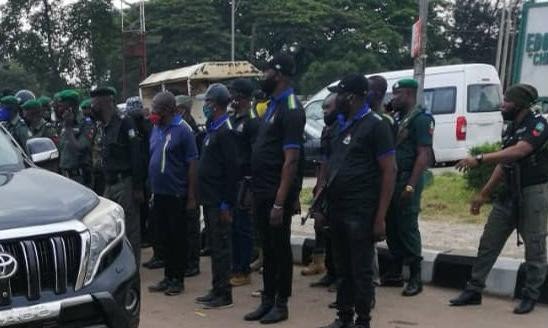 The Peoples Democratic Party, PDP, on Thursday blowed hot  over the heavy deployment of security operatives around the Edo State House of Assembly.

The main opposition party is furious that the federal government mobilized security operatives to take over the state House of Assembly.

In a tweet on it’s verified Twitter handle, the party claimed that the federal government’s decision was due to the popularity of the state Governor, Godwin Obaseki.

PDP, however, described the action as unacceptable.

“Breaking News! Irked by the growing popularity of @GovernorObaseki of Edo state and overwhelming acceptance by his people, the @OfficialAPCNg led Federal Government has mobilized @PoliceNG and other security agents to take over the state house of assembly. This is totally unacceptable,” PDP tweeted.

It was earlier reported that the premises of Edo State House of Assembly was on Thursday morning besieged by security officers from the Nigeria Police force.

Rumour had it that some elected House members who are on the side of the All Progressive Congress, APC, loyal to the former party chairman, Adams Oshiomhole had perfected plans for sitting at the Assembly complex, which is currently under renovation