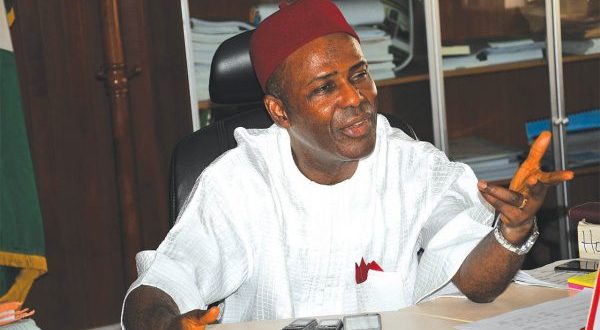 Dr Ogbonnaya Onu, the Minister of Science and Technology, has said that the All Progressives Congress (APC) in Ebonyi would wrest political power from the ruling Peoples Democratic Party (PDP) in the state,

Onu stated this at a meeting tagged ‘Unity, Peace and Progress’ meeting held on Thursday in Abakaliki.

The minister said that APC in the state would hoist its flag at the Ebonyi Government House in 2023 and urged party faithful to unite to achieve a common destiny.

Onu noted that the party could surmount any challenge if united by a common bond and thanked leaders of the party for burying their differences in the interest of the party.

“If we work together as a party there is no mountain we cannot climb and I want to assure you that it is very important that we do so.

“APC will take over power in the state and we are going to hoist our party’s flag in the Government House by 2023; all we need do is come together and remain united,” Onu said.

The minister said that the APC-led Federal Government under the leadership of President Muhammadu Buhari had done a lot to rewrite the country’s ugly past.

He said that road infrastructure, security, youth empowerment and job creation had received boost under the Buhari administration.

He said that South-East geopolitical zone had benefitted from the President’s developmental strides and called on party faithful in Ebonyi and the zone to continue their support for the president.

Onu explained that the Enugu/Onitsha, Enugu/PorthHarcourt and other major roads in the zone under rehabilitation were at various levels of completion.

The minister applauded the president for the speedy work going on at the second Niger bridge as well as the completion of renovation work at the Akanu Ibiam International Airport in Enugu.

“The Zik’s Musoleum started many years ago and abandoned was completed by this administration and today we virtually have a brand new airport with a runway that is one of the best in the country that can take any aircraft.

“Enugu/PorthHarcourt express road abandoned for many years and turned into a farmland is almost completed while the Umuahia Federal Medical Centre has been upgraded to world class standard with state-of-the art medical equipment.”

Meanwhile, Mr Eze Nwachukwu, an APC chieftain, while briefing newsmen after the meeting noted that the meeting was aimed at strengthening the party in the state after its poor outing in the 2019 general elections.

Nwachukwu said that the meeting addressed bickerings and other crises that rocked it after the 2019 election.

He added that the reconciliation would make APC stronger and better repositioned to win elections in the state by 2023.

“From today all bickerings, all factions have been buried for us to move forward as we strategise to win elections in 2023,” Nwachukwu said.

He appealed to members to eschew all forms of anti party activities stressing that the party would deal with anybody caught engaging in acts capable of undermining the party in the state.