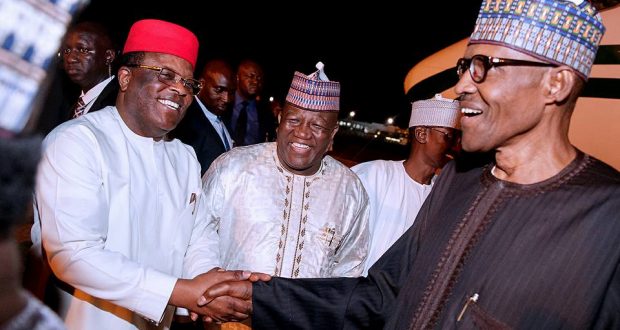 Ebonyi: We’ll deal with any person that foment trouble during Buhari’s visit – Police

The Ebonyi Police Command on Monday warned the proscribed Indigenous Peoples of Biafra (IPoB) and political parties’ supporters against disruptive acts during President Muhammadu Buhari’s visit to the state on Tuesday.

He gave the assurance that the Command was well equipped to deal with all forms of security challenges before, during and after the President’s visit.

According to Lamorde, any individual or group of persons that foment trouble before, during and after the visit, would be severely dealt with, as people are advised to conduct themselves well.

“I will not disclose the number of personnel we have drafted for security reasons, but I assure citizens that enough personnel have been deployed across the state to ensure a hitch-free visit.

“The President’s visit is a welcome development as the citizens should cooperate with security agencies to make it a successful one,” he said.

“We would not meddle into political issues as security outfit, but the visit is development-oriented because of the numerous projects the President would inaugurate.

Some proscribed IPoB members have been making uncomplimentary remarks while the rivalry between the Peoples Democratic Party (PDP) and All Progressives Congress (APC) members, had heightened prior to the visit.

Previous: Governorship election: Police warn IPoB and its members to steer clear of Anambra
Next: NOA to electorate: Ignore ‘vote and die’ threat by IPoB in Anambra