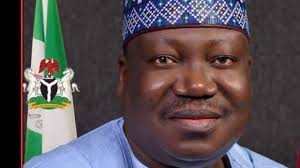 Buni has crumbled PDP, APC will win in 2023- Lawan

President of the Senate, Ahmad Lawan has mocked the major opposition, the Peoples Democratic Party, (PDP).

The number three man in the country said that the opportunity party has been crumbled by Governor Mai Mala Buni, during his stewardship as Chairman, All Progressives Congress, APC, Caretaker Extraordinary Convention Planning Committee.

He made this remark at a grand reception organized in Damaturu on Thursday to celebrate and honour the governor for a job well-done in taking the ruling party to an enviable height.

“Your Excellency, you have proven beyond any reasonable doubt that President Muhammadu Buhari our leader made the right decision and choice by ensuring that someone who will deliver our party at the time of crisis was made the Chairman to take care of the party and plan the convention that we have just concluded at the weekend.

“Your Excellency, you have made us proud. We are proud Yobeans, because you have done everything and anything expected of you as the Chairman of the Caretaker and Convention Planning Committee of the APC,” Lawan said.

He noted that APC is brand new in Nigeria, courtesy of Governor Buni.

“Today we have an APC that has a new set of National Working Committee members. And in fact, today is a great day in Yobe State because we are here to celebrate you for what you have been able to do”.

He added that with the kind of leadership now in place, APC is fully ready for 2023 general elections

“APC will produce the next President of the Federal Republic of Nigeria in 2023 and APC will probably have two third majority in the Senate and the House of Representatives. With what you have been able to achieve, APC cannot have anything less than 36 governors across the country, plus FCT Abuja”, he affirmed.

He thanked Governor Buni for his steadfastness in repositioning the party.

Previous: 2023: Atiku, Saraki, others are liars, don’t vote for them- Obasanjo tells Nigerians
Next: 2023: IBB okays adoption of consensus presidential candidates for PDP