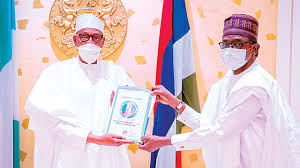 The interim Chairman of APC, and the Governor of Yobe State, Mai Buni has given kudos to President Muhammadu Buhari for establishing the North East Development Commission (NEDC).

He made the commendation in Gujba on Friday, while inspecting the ongoing Gujba-Mutai-Ngalda road project.

According to him, the commission was taking the lead in tackling numerous humanitarian crises triggered by the decades-old insurgency in the zone.

The governor, who charged the contractor to hasten the completion of the road, which would fast track commercial activities in the area, expressed his satisfaction with the level of work on site and assured the contractor of his total support to deliver the project in good time.

In his remarks, The NEDC Managing Director, Mohammed Alkali, said infrastructure development was critical to the overall achievement of the commission’s mandate.

He said the on-going construction of the 40 km Gujba-Mutai section of the road was undertaken by the North-East Recovery and Stabilization Programme (NERSP)/Multi-Sectoral Crisis Recovery Project (MCRP),under NEDC’s supervision.

“ Your Excellency may recall requesting the Commission to construct the remainder 54km – from Mutai to Ngalda section.

“ We have thoroughly reviewed the design and working details provided by the state and the immense economic benefits the road will create not only to Yobe but the entire North-East Region.

“ We are now ready to commence work,” Alkali said.

He noted that the state was also a beneficiary of other projects under the MCRP, including the establishment of a stand-alone Trauma Service Centre, Community Town Halls, among others

Previous: Igbo Presidency- We will respect the position of APC- Uzodinma
Next: Gubernatorial Election: PDP is on mission to rescue Anambra- Ozigbo