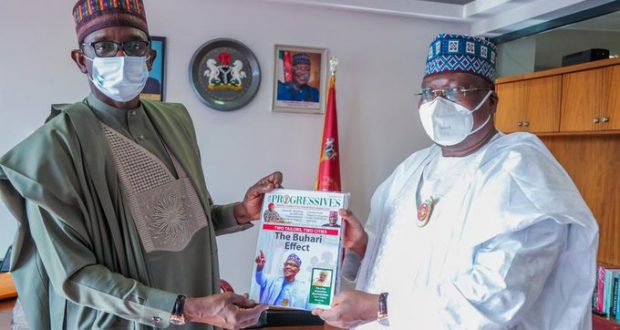 The Chairman Caretaker Committee of the All Progressive Congress, APC, Governor Mai Buni  has presented the newly established APC magazine to the Senate President, Ahmmed Lawan in latter’s office in Abuja.

The magazine established is to project the achievements of President Buhari’s government to the outside world.

Speaking to the Senate President during the visit, Buni said described the magazine project as one of the strategic communication mediums to brand APC’s government.

Governor Buni told the Senate President: “This is our project and one of our strategic communication mediums to highlight the visible strides of our party and the President Muhammadu Buhari administration.”

Responding, the Senate President described the magazine initiative as well-thought and laudable.

APC in its official Twitter handle said: “The SP features exclusively in the upcoming 4th edition of the magazine. It speaks on the current status of the PIB, measures the NASS is taking to ensure Nigeria’s quick exit from recession

Previous: I defected to APC to be the Governor of my state, Sen Abbo breaks silence
Next: PDP has no provision for Governor-General, Ogun chapter tells Seyi Makinde