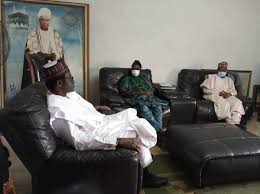 He also visited a leader of the Yoruba Council of Elders (YCE), Dr Kunle Olajide, the Aare Musulumi of Yorubaland, Alhaji Dawud Akinola.

They held a one hour meeting before departing for Akure, the Ondo State capital, it was learnt.

A source said the APC leaders discussed the prospects of defection by Ladoja. The source said the governors spoke about how Nigeria would get better through good leadership that will foster unity and good governance. To achieve that, the governors were said to have told Ladoja that his experience and track record show that he had a role to play in making Nigeria better, even if he would not contest any election

Another source said the governors emphasised the importance of Oyo State in Southwest and Nigerian politics at large and requested the politician to join the APC train to actualise in its dream of building a better Nigeria.

On the request to join the APC, Ladoja did not give an emphatic response. The source said he reportedly said: ‘Your request is well noted.”

Ladoja has since announced his retirement from partisan politics, saying he would only support parties and candidates of his choice.

Oyo State PDP said the governors’ visit to Ladoja was not a source of worry. Its Publicity Secretary, Mr Akeem Olatunji, said: “ Chief Ladoja is an elder statesman. Any political party or individual can visit him. Our national chairman, Uche Secondus, or APGA can visit him tomorrow. He is expected to be open to everybody as an elder statesman, irrespective of party affiliation since he is no longer carrying the card of any political party.

“Governor , Makinde is performing excellently and Chief Ladoja is happy with that. So, we have no reason to be disturbed about the visit.”

Previous: Removing Buni as Chairman will be a great mistake- Fani-Kayode warns APC
Next: Akeredolu mourns as House of Reps member dies