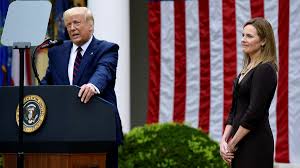 The supreme court has formally rejected Donald Trump’s request to block the House select committee investigating the Capitol attack from accessing White House records related to the events of 6 January 2021.

The court announced on Tuesday in its latest list of orders that it would not take up Trump’s appeal to a lower-court ruling allowing the select committee access to the documents.

The news comes a month after the supreme court rejected Trump’s emergency motion to block the release of the documents as his case regarding executive privilege claims made its way through the courts.

That January ruling cleared the way for the select committee to start receiving Trump White House documents. They have already started combing through the records.

Seven people died as a result of the attack on the US Capitol by supporters Trump told to “fight like hell” in service of his lie that his defeat by Joe Biden was the result of electoral fraud.

The attack did not prevent certification of electoral college results, though 147 Republicans in the House and Senate did lodge objections.

More than 100 police officers were injured. More than 700 people have been charged. Eleven people, members of the far-right Oath Keepers militia, face charges of seditious conspiracy.

Trump was impeached for inciting an insurrection, but acquitted when enough Republican senators stayed loyal.

The committee is working quickly, given Republicans’ expected takeover of the House after midterm elections in November.

Public hearings are believed to be on the way and key aides to Trump have been served with subpoenas or asked to co-operate. Few have. Steve Bannon, a former White House strategist and key figure on the pro-Trump far right, has pleaded not guilty to contempt of Congress – a criminal charge carrying jail time.

Others including the former chief of staff Mark Meadows have refused to co-operate. Members of the panel have said they expect Rudy Giuliani, Trump’s personal lawyer and a key figure in attempts to overturn the election, to testify.