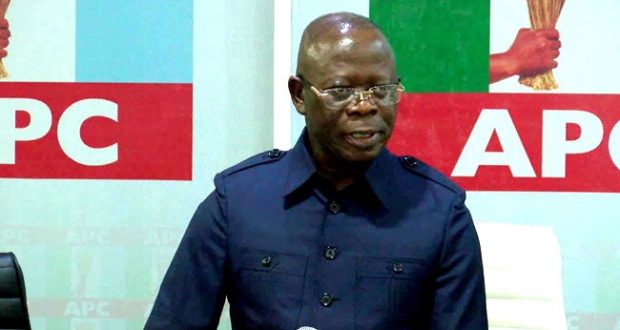 The Edo State Deputy Governor, Philip Shaibu has challenged the National Chairman of the All Progressives Congress (APC), Comrade Adams Oshiomhole, and all governorship aspirants in the state to an open debate.

According to him, Governor Godwin Obaseki’s moral uprightness and service delivery as the endearing factors for which the people of the state would reelect their team.

Comrade Shaibu, in the statement issued by his Special Assistant on Media, Benjamin Atu, and made available to journalists in Abuja, said “I am throwing an open invitation to anyone who has the moral standing of Godwin Obaseki to come out and defend their statements in an open debate.”

According to the statement, the deputy governor said “the nature of a political system is a factor that usually conditions the expectation and behaviour of political actors’’.

The deputy governor attributed the present crisis in the party to the various means and strategies used by Comrade Adams Oshiomhole to direct the behaviour and actions of his political associates.

‘’We have given voice to the voiceless. The government has returned power to the masses. We run a transparent government where our records can be evaluated.

“It beats my imagination that the same man who betrayed an arrangement suddenly turned 360 degree against his words and started tormenting the government’’, he said.

The deputy governor challenged Oshiomhole and other governorship aspirants to a public debate so that the good people of Edo State can judge for themselves their track record.

‘’This is the time for the people to know about our performance and evaluate our government based on our achievements in office.

“If Adams Oshiomhole and members of his factional group have the moral turf of the government of the day in Edo State, let them come and tell the world in an open debate” he said.

Previous: Obasagate: How I used N80m to sponsor lawmakers’ wives on a trip to Dubai- Lagos Speaker
Next: “I did not order EFCC to probe Minister of Niger Delta Affairs,” Omo-Agege denies