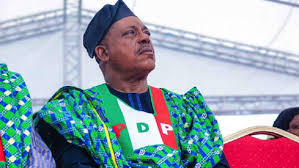 Some legal experts have said that the embattled Former Chairman of the Peoples Democratic party PDP, cannot return as the party Chairman now.

It will be recalled that Rivers State High Court on Monday issued an order of interim injunction restraining Prince Uche Secondus from parading himself as the Peoples Democratic Party (PDP) National Chairman.

But, a Kebbi State High Court on Thursday ordered him to continue exercising all the constitutional powers of the office of Chairman of PDP “pending the hearing and final determination of applicant’s motion on notice”.

According to the experts, both courts are of coordinate jurisdiction. One cannot sit on appeal over the other. The Kebbi judgment cannot stand superior to the valid and subsisting order of the Rivers court.

They argued that the affected party can get the Kebbi judge to vacate the order by bringing the subsisting order of the Rivers court to his attention.

A maxim of equity states that “when two equities are equal, the first in time shall prevail”. In this instance, the order of the Rivers high court is first in time.

In Orji Uzor Kalu Vs. Federal Republic of Nigeria, the Supreme Court held that courts of concurrent jurisdictions are not bound by each other’s decisions.

Ultimately, where there are conflicting decisions by courts of coordinate jurisdiction, the appellate court will set matters straight.

“It has to be so because the right to set aside orders of the court is ordinarily the prerogative of an appellate court, which itself operates on the well-tested reasoning that two heads (sometimes even more) are better than one when it comes to deciding the wrongness of the decision of a judge.

Previous: Gov Zulum’s passion, diligence worthy of emulation- APC Governors
Next: Why I have not been in Nigeria for few years- Atiku