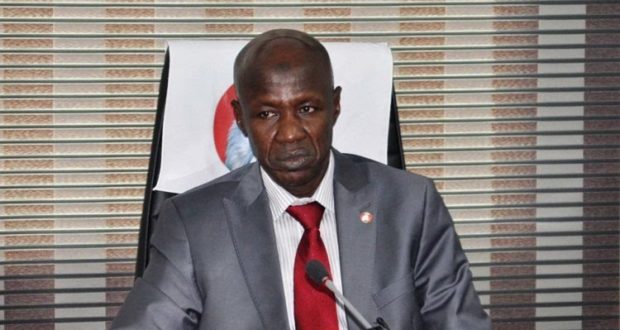 A group Savers Empowerment Ambassadors Initiatives, Nigeria (SEAIN) have disclosed that corrupt politiciansworking against the confirmation of Ibrahim Magu as substantive chairman of the Economic and Financial Crimes Commission (EFCC). The group spoke in Lagos through its chairman Frank Ezike urging President Muhammadu Buhari to initiate steps for the ninth National Assembly (NASS) to confirm Magu who has been acting since 2015.

Ezike who was a member of the All Progressives Congress (APC) presidential campaign council in the last election appealed to Buhari to ignore the machinations of those strenuously attempting to frustrate Magu’s confirmation, adding that their actions reeked of dirty political maneuvering. According to Ezike, the EFCC under Magu has recorded remarkable achievements, a clear testimony to his determination to fight corruption to a standstill in line with Buhari’s avowed commitment.

He said: “We are happy that the present National Assembly is committed and working hand in hand with our President towards redeeming this country from the hands of corrupt people. That is why we are appealing to the president to use his good offices to facilitate the immediate confirmation of Ibrahim Magu as EFCC chairman. We in SEAIN are aware of the quantum and glaring achievements recorded by EFCC so far under Magu and we will not relent in calling for the fulfillment of this request based on our conviction that he stands tall in assisting our president in delivering the goods for our countrymen and women.

“Details of convictions and trials recorded so far are eloquent testimonies to the good work Magu has achieved and he deserves a part on the back and an endorsement will make him achieve more,” he said.