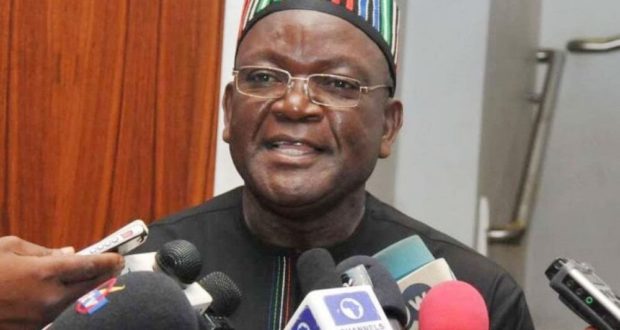 Court case over, I am now in a hurry to work- Gov Ortom

Gov Samuel Ortom of Benue says he no longer has any reason to fail the people of the state following the outcome of the Supreme Court judgment on the Governorship election,

Speaking to Journalists on Wednesday in Makurdi, Ortom said with election litigations against him ended, he was in a hurry to work.

The Supreme Court had on Tuesday, affirmed the re-election of Ortom and dismissed the petition by the All Progressives Congress (APC) and its governorship candidate, Mr Emmanuel Jime, for lack of merit.

The governor said he had returned all the glory to Almighty God over his victory at the Supreme Court adding that he “remains grateful to the Benue people for giving him another term”.

He said he now had no excuse to fail but to provide good governance to the people of the state stressing that politicking and litigations were all over.

“I remain grateful and I owe them good governance, dividends of democracy and cooperation in ensuring that we add value to the development of Benue State.

“Politics is now over, elections and litigations are all over, we can now work together.

“No more litigation, no more distractions, now, I will be focused to deliver dividends of democracy to our people. We will ensure that we add value to education, health services, rural transformation infrastructural development, water supply and all.

“Because there is no more excuse again, no time, we will be in hurry to do the work,” he promised.

He explained that the task of building Benue was the responsibility of the people and restated his call on members of other political parties to join hands with him to develop the state.

Ortom reaffirmed his confidence in the Nigerian Judiciary, which, he said had once more proven that it was a `true pillar of democracy’.

The governor also commended his team of lawyers for their outstanding performance at the courts.

Ortom reassured the people that his administration would continue to “aggressively” address development challenges in various spheres of the economy.

He said his administration was not opposed to the N30,000 new minimum wage adding that the Benue worker even deserved a far better wage if the resources were available.