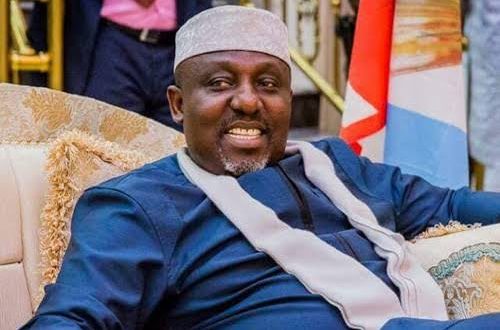 Court Judgement: Imo has been librated from Okorocha’s dynasty- CUPP

Spokesman of the Conference of United Political Parties (CUPP), Ikenga Ugochinyere Imo says the Friday’s Supreme Court judgement on the candidacy of Chief Uche Nwosu in the 2019 governorship election in Imo State connotes a total liberation of the state from the dynasty of the former governor, Rochas Okorocha’s family.

The Supreme Court had on Friday morning upheld the decisions of the two lower courts by quashing the governorship ambition of Uche Nwosu, the son-in-law of Senator Okorocha, effectively stopping his ongoing appeal petition at the Supreme Court against the election of Governor Emeka Ihedioha.

In a unanimous judgment, Justices RhodesVivour, Mary Peter- Odili, Ejimbi Eko, Amina Augie and C.C Nweze, in a suit filed by the Ikenga Imo Ugochinyere led Action Peoples Party, (APP), held that by virtue of Uche Nwosu’s double candidature and in line with the clear provisions of the Electoral Act, he was bound to be disqualified from the election and affirmed the judgments of the High Court and the Court of Appeal The Nation reports.

Reacting to the judgment in Owerri, the Imo State capital, Ugochinyere, who is the national chairman of the APP, declared, “The significance of this judgment is that Imo State has finally been liberated from the Okorocha dynasty which for eight years fleeced and destroyed the state”.

He expressed joy that his party was the one that sealed the fate of the Okorochas and liberated Imo State from their shackle.

The CUPP spokesman also called on the EFCC and the ICPC “to take the advantage of the judgment which has permanently robbed Uche Nwosu of his planned immunity and investigate him, Senator Rochas Okorocha and their ilk with a view to recovering every Imo kobo from them”..