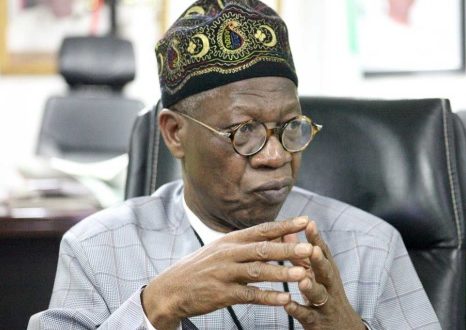 The Federal Government has warned some state governors to stop playing politics with the directives concerning the coronavirus pandemic spreading across the country.

The Minister of Information and Culture, Alhaji Lai Mohammed issued this warning on Friday when he featured on Nigeria Television Authority (NTA) programme, Good Morning Nigeria”.

He underscored the need for continued engagements with states and harmonisation of directives.

The Minister, a member of the task force, said the kind of rifts and counter directives between some states and the federal government in the efforts to contain covid-19 were uncalled for and unnecessary.

Responding to a question on the controversy over the chopper that flew into Rivers State and the arrest of the pilots, Mohammed said such rift was uncalled for and people should stop politicising covid-19 fight.

“The federal government has responsibility to all Nigerians irrespective of the state they reside.

“A situation where the federal government needs exemption for certain category of people but the state government will not cooperate is not helpful.

“We will not succeed if there is no cooperation with the state governments,” he said.

Reacting to question on some state governors that have ordered the relax of stay at home order for Jumat and Easter festivities, the minister underscored the need for harmonisation of the directive of President Muhammadu Buhari for lockdown in the FCT, Lagos and Ogun states.

“We have a very little window, and as of today, there is no known cure or vaccine for this disease all we have is Non Medicinal Intervention basically on prevention and management.

“We need the cooperation of the populace as a whole and they need to listen to what the federal government is saying.

“The whole essence of the lockdown is that by the time we lockdown for 14 days it is a presumption that whoever is incubating the virus must have manifested.

“However, people can contact the disease by not staying at home or not adhering to the hygiene instructions like washing of hands regularly, using hand sanitiser and social distancing,” he said.

It will be recalled that as parts of measures to check the spread of coronavirus, many states banned large gatherings and restricted movements.

However, despite the fact that covid-19 as at Thursday had spread to 17 states with 288 confirmed cases, 51 recovered and discharged patients and seven deaths; some states have relaxed the measures ahead of Easter and for Jumat prayers.

Specifically, Gov. Rotimi Akeredolu of Ondo approved the request of the Christian Association of Nigeria (CAN) in the state to observe the Easter Sunday worship in various churches across the state.

Ebonyi state government, relaxed ban on burials by giving those in the state between April 9 and April 20 to bury their dead.

Worshippers in the state are expected to attend their normal service only on Sunday for Christians and Friday for Muslims with effect from April 12.

Similarly, Gov. Yahaya Bello of Kogi directed that the ban on religious gathering be lifted to allow for normal worship and services.

In Katsina state, Gov. Aminu Masari directed that Muslim faithful will be allowed to observe their Juma’at prayers under strict health and security guidelines.

Gov. Douye Diri of Bayelsa on his part relaxed interstate boundary closure, on the ground that it would allow for foodstuffs, drugs and vehicles conveying personnel on essential duty access the state.