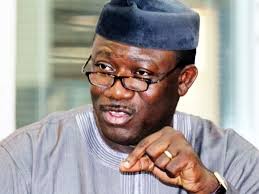 A group known as GYB2PYB has lashed out at Governor Kayode Fayemi of Ekiti for criticising Governor Yahaya Bello of Kogi over the statement made by the Kogi Governor against  COVID-19 vaccine which has generated a heated debate on the social media.

The Governors’ forum,, through Fayemi had said Governor Bello has the right to his opinion on Covid-19 vaccine, but warned him against risking the lives of his people.

The Governors’ Forum said that as leaders, the duty of the Governors is to protect the lives of the people and would continue to work with relevant agencies towards curbing the pandemic.

But reacting,  GYB2PYB through a statement signed by its Director-General, Amb Oladele Nihi said Fayemi doesn’t have the the political will to speak on behalf of the Presidential Task Force (PTF)

“It would have been more honourable for Fayemi to come out and attack GYB than hiding under the garb of the Governors’ forum. His Excellency is on course, his message is resonating and detractors will fail,” the group leader.

“So, the Governors’ forum attacking GYB’s message to the Nigerian public is a misnomer and done in bad taste,” he added.

Previous: Why Yoruba may lose 2023 Presidency- Group
Next: Court to decide fates of Gbadamosi, Abiru on March 1