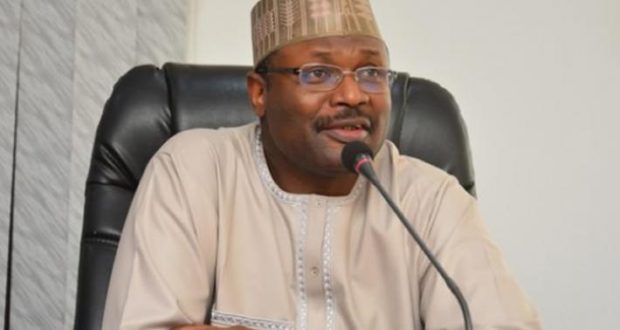 INEC has vowed that all elections will go on as scheduled despite the Coronavirus scare, adding that “while the Commission takes the COVID-19 pandemic seriously, our democracy and electoral process cannot be truncated for this reason, particularly because health authorities have advised on measures to protect the public from the virus, including all those involved in elections.”

It added that it will conduct the Bayelsa Central, Bayelsa East, Imo North and Plateau South, as well as other bye-elections ahead of the two major Governorship elections in Edo and Ondo States.

INEC National Chairman, Prof Mahmood Yakubu, who gave the hint in his remarks during the maiden virtual meeting with States Resident Electoral Commissioners, stated that “the Commission has directed the RECs for the nine States where the bye-elections will hold to begin preparations in earnest”.

He added that, “the same time, we are also studying reports of recent elections conducted under the COVID-19 pandemic”,

“I must quickly add that with today’s virtual meeting with you, the deployment of communication technology will increasingly become the dominant means of information dissemination within the Commission in particular and the management of the electoral processes in general, including future engagement with stakeholders”.

He continued that, Today’s meeting is holding against the background of the global health challenge posed by the COVID-19 pandemic in which no country around the world is unaffected. Our country’s national effort to combat the pandemic is coordinated by the Presidential Task Force (PTF) on whose request the Commission has made available a number of vehicles from our fleet to support the emergency response.

“The majority of these assets were deployed to Lagos, Kano and the Federal Capital Territory (FCT) which have so far recorded the highest number of reported cases in the country.

“Like every national institution in Nigeria, the COVID-19 pandemic has disrupted our activities. For instance, further engagement with the National Assembly and stakeholders on electoral reform as well as the conduct of some off-season elections had to be suspended because of the global health emergency. Happily, the PTF has issued Guidelines on protective measures for the gradual restoration of normalcy nationwide. On that basis, the Commission recently released its own policy on conducting elections in the context of the COVID-19 pandemic. The Commission is convinced that electoral activities can resume but in full compliance with the advisory issued by health authorities.

“Consequently, the end of tenure Governorship elections in Edo and Ondo States scheduled for 19th September 2020 and 10th October 2020 respectively will proceed as planned. Already, some of the registered political parties have notified the Commission of the dates for their party primaries leading to the nomination of their candidates for the two elections.

READ ALSO: INEC to pilot use of electronic voting machines soon — Yakubu
“While the Commission takes the COVID-19 pandemic seriously, our democracy and electoral process cannot be truncated for this reason, particularly because health authorities have advised on measures to protect the public from the virus, including all those involved in elections.

“In addition to the two Governorship elections, the Commission is also making preparations to conduct nine legislative bye-elections. Already, vacancies have been declared by the Senate President in respect of four Senatorial Districts (Bayelsa Central, Bayelsa East, Imo North and Plateau South). Similarly, the Speaker of the Nasarawa State House of Assembly has declared the seat for Nasarawa Central State Constituency vacant. Information reaching the Commission also indicates the existence of vacancies for the Cross River North Senatorial District, Nganzai and Bayo State constituencies of Borno State and Bakori State constituency of Katsina State.

“The Edo and Ondo Governorship elections as well as the five Senatorial and four State Assembly bye-elections are spread across nine States of the Federation involving a cumulative number of 62 Local Government Areas (LGAs); 687 Registration Areas (RAs); 9,149 Polling Units (PUs) and 6,454,950 registered voters. Put in the context of our sub-region, the number of registered voters for these off-season elections is equivalent to holding General Elections in Liberia, Guinea Bissau, Sierra Leone and Cape Verde put together. Full delimitation details for the elections have been uploaded on our website and social media platforms.

“The Commission is determined to hold some of the bye-elections ahead of the two major Governorship elections in Edo and Ondo States to enable us test run and fine-tune our modified processes in view of the COVID-19 pandemic.

“Already, the Commission has directed the RECs for the nine States where the bye-elections will hold to begin preparations in earnest. At the same time, we are also studying reports of recent elections conducted under the COVID-19 pandemic, especially in places such as Mali and South Korea, for any lessons that will strengthen our processes and protect all those involved.

“At this meeting, we will receive the input of our RECs to the new policy with particular reference to its implementation in the areas of recruitment and training of ad hoc staff, logistics for the deployment of personnel and materials, the conduct of party primaries and nomination of candidates, the submission of the names of polling agents by political parties, the accreditation of observers and the media, the security of the electoral process, polling unit management and the collation and declaration of results.”

Previous: Edo 2020: Ize-Iyamu names those made him main challenger of Obaseki
Next: Your govt will be in crisis, you may lose another close aide,” Prophet Ayodele tells Buhari