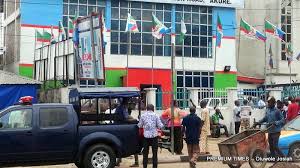 Stakeholders of the All Progressives Congress (APC) in Akwa Ibom State led by a key party member, Group Captain Ewang (retd), have declared as null and void the purported suspension of 17 caretaker committee chairmen of the party.

It will be recalled that the state Caretaker Committee Chairman of the APC, Dr. Ita Udosen, yesterday announced that the State Working Committee of the party had suspended the chapter chairmen

They were accused of opposing the credibility of the ward congresses, which was purportedly held last Saturday.

He insisted that there were no ward congresses in the state.

He called on President Muhammadu Buhari, Senator Godswill Akpabio, and other eminent stakeholders to rescue the party in the state from collapsing.

‘’We call on President Buhari in his capacity as the leader of the party in Nigeria to call to order the Akwa Ibom APC Caretaker Committee Chairman, Dr Ita Udosen, who has been operating as though he is a domestic staff of Senator John Udoedehe.

‘’We unanimously reject in totality the deployment of Senator John Udoedehe’s man, Friday and apologist, Mallam Shehu Sheriff, from Abuja to superintend over the conduct of ward congress in Akwa Ibom State.”,

Previous: 2023: How APC, Buhari are planning a coup against Nigerians- Wike
Next: Schism hits PDP camp as Governors sharply divided over Secondus