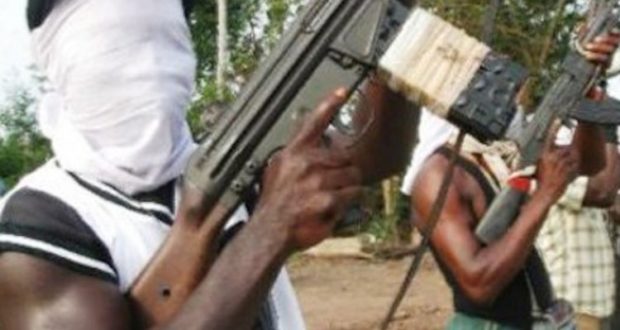 Some Unknown gunmen have allegedly abducted INEC officials with materials that were headed for the 8 polling units in Afayna/Igoni-Igoni ward under Abi state constituency in Cross River State.

The Federal Commissioner of Independent National Electoral Commission INEC in charge of South-South region, Dr. Mohammed Lecky told newsmen during election duties that the incident occurred in the middle of the river leading to the community.

Backed by the state Resident Electoral Commissioner Dr. Alalibo Johnson and the Administrative Secretary of INEC in the state Mrs. Irene Ngozi Oghuma, the Federal Commissioner said the unknown gunmen accosted the Electoral officials with materials and went away with all the voting materials along with the SPO (State Presiding Officer).

According to him, the security men that accompanied the materials and men of election duties decided to avoid casualty by not engaging the unknown armed men in the middle of the river.

He expressed sadness over the incident but thanked God that all the NYSC members on duty and other election duty officials have returned safely to office except the SPO, whose phone is ringing but he is not picking.

He said the total number of registered voters in the affected area where the materials have been hijacked is 5606.

The Re-run in Cross River State affected 33 polling units covering Ekureku ward one and ward two for Abi/YAKURR Federal Constituency where Dr. Alex Ebona of the APC is aiming to retain the seat he won during the February 2019 elections.

The Re-run also affected some wards in the Abi State House of Assembly constituency.

Across many other polling units visited during the voting hours, there was a huge turnout of voters.

The PDP candidate, Hon. John Gual Lebo, whose petition led to the rerun election refuse to speak to newsmen as he was seen holding meeting with his supporters at the resident of the former governor of the state.

However, Dr. Alex Ebona, the APC candidate expressed satisfaction over the huge turnout of voters noting that the incident of hijack of material occurred in the area for the state house constituency election.

According to him, he is told the election in the affected area will be held the next day if the problem was not resolved before close of voting.

Dr Alex Egbona, said:” The turn out is encouraging and you know that the election is in my community. I am in touch with my community and that is why you see this unprecedented turn out.”

The election materials arrived very early just as voters turned out as early as 6: 30 am.

It was also observed that the INEC officials had initial difficulty in containing the mammoth crowd, especially at Gbagaro Agbara and Egbonyi polling units within Ekureku II ward.

Speaking on the conduct of the election, the presiding officer for Gbagaro Agbara polling unit, Mr Isaac Oke, said: “I can tell you the election materials arrived at 8:00am and we commended accreditation immediately because the voters were already on ground.

“There is large turn out of voters as you can see. The card reader is very slow, but we promise to ensure that everybody would vote at the end of the day.

Also speaking INEC observer, Mr Jubril Isa, commended the voters for their peaceful and orderly conduct but observed that the processes are slow.

He enjoined INEC to try and improve upon it so that no voter is disenfranchised this exercise, The Nation reports.