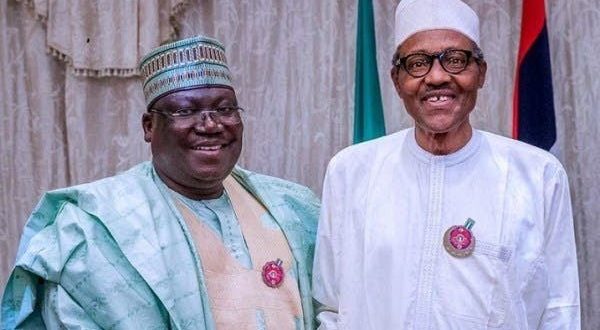 The Presidency says the rumour being circulated that the present National Assembly is a rubber stamp of President Muhammadu Buhari’s administration.

The Senior Special Assistant to the President on National Assembly Matters (House of Representatives), Umar El-Yakub said this while addressing State House correspondents in Abuja.

He noted that the cordial relationship currently existing between the Executive and Legislature is an indication that both arms are determined to work together in the interest of Nigerians.

The presidential aide also said the symbiotic relationship was the outcome of a camaraderie aimed at delivering effective services to Nigerians while avoiding rancour that could derail such service delivery.

El-Yakub said the National Assembly, as currently constituted, is working to actualise the expectations of Nigerians, in partnership with the Executive to deliver good services to Nigerians.

“So, the Executive arm of government has always partnered the membership of the National Assembly, especially the Ninth Assembly, as demonstrated by their actions in terms of expeditious passages of Bills as well as screening of nominees of Mr President for various appointments.

Read Also: Lagos Assembly re-orders 2020 budget
“I believe Nigerians voted members of the National Assembly to represent their interest and to work for their betterment as well as to make laws that will be for good governance and order for the country.

“As you have witnessed, the signing of the 2020 repeal and amendments Bill is one of those the National Assembly looked at expeditiously because it is an amendment that was necessitated by the circumstances of the moment; that is, the pandemic, which also caused a serious strain on the economy in terms of the revenues that are generated as well as other benchmarking indices.

“So, to that extent, you find out that the National Assembly is rising to the expectations of Nigerians, partnering the Executive to deliver on services to Nigerians.

“For me, that is responsibility; that is partnering in nation-building and, indeed, that is what they have been elected to do.”