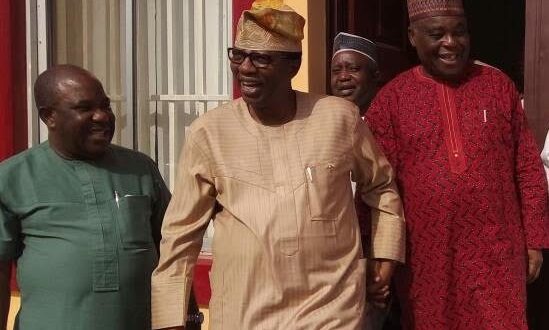 Gbenga Daniel, former governor of Ogun State, says he is a crisis manager, and best suited to lead the Peoples Democratic Party (PDP) as national chairman to regain power in 2019.

Daniel is one of the aspirants eying the national chairmanship position of the party, to be determined through election at its Dec. 9 convention.

He was in Kogi on Wednesday for a  meeting with the party delegates from the state to seek their support.

Daniel said he could lead the PDP to bounce back and  “change the change” at the federal and state levels it had lost, come 2019.

He described the PDP prior to the 2015 elections as crises-ridden and promised to deal decisively with all the crisis that bedevilled the party and robbed it of its prime position in the country.

“I’m a crisis manager as I have just told you; and not only that.

“I’m a tested hand. I understand what it means to run an election. I have manned a state before and I have managed people.

“The bulk of the challenge we have in the party is just people’s management.

”For you to be successful, you must have the capacity to manage interlocking interests.

“As crisis managers, we must strive very hard to underplay areas of division”, he said.

The former governor said he was presenting himself for the position of the National Chairman to rebuild the party.

He promised to entrench the culture of internal democracy, if successful in his bid at the forthcoming convention.

State Chairman of PDP, Sam Ohuotu, commended the former governor and his team for bringing their campaign train to Kogi, assuring him of members’ support.

Ohuotu described the aspirant as a leader with capacity to lead the party to victory in view of his antecedents.

He, however. warned that it was not going to be a smooth sail, saying: “if we start by attacking ourselves from the beginning, then we have lost it’’.

“My opinion therefore is that there might be issues, but we must not personalise such issues, and I believe we will resolve our issues. Regrettably, we didn’t show that we have learnt any lesson.

“From my own little investigation, people said that the PDP candidate in Anambra election was a good candidate.

“But what we keep hearing was that the process that brought that candidate was faulty and that is precisely what I keep talking about.

“That this is about management of human beings. We could still have brought that up without pressing on anybody’s head,” he said.

Ohuotu, however, declared that the PDP was poised to bounce back in 2019, as the ruling party was not doing enough for the people.

Previous: Tinubu to Okorocha: You and others must be joking to endorse Buhari for 2019
Next: Now that Obiano has been re-elected as governor, Uzor-Kalu wants him in APC