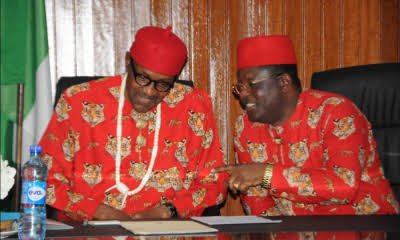 AESID President, Paschal Oluchukwu, speaking in a statement described the action of the governor as illegality.

The group said that the action of the Governor contravenes the provision of Nigerian constitution and existing Supreme Court verdicts.

According to the group, the constitution and court verdicts stipulate that a political office holder, including  a governor cannot move to another political party unless there is an internal division within his party..

“In view of the foregoing breaches of the fundamental rights of citizens of our dear State, therefore, and the potentialities of same to plunge Ebonyi into a serious political crises, a threat we had foresaw and consistently cautioned Umahi about, AESID boldly urge the lawmakers to immediately commence impeachment proceedings against the Governor.

“We make this call due to our belief and understanding of Umahi as a brutal dictator who is ready to set our dear state on fire in pursuit of his ego-laced interests. Like we have always reiterated, Ebonyi belongs to all of us and one man’s personal ambition and interest cannot plunge the rest of the State which our fore-fathers laboured for many years into crises of monumental proportion.”

Oluchukwu declared that Ebonyi cannot be set aflame simply because Umahi wants to “protect his wealth” with the pretence of running for the highest office in the land.

The group lamented that the defection of the governor shows a character of an ingrate and aa betraye.

“For us in AESID, his defection is only a manifestation of his true character-an ingrate, a traitor and a betrayer all combined into one. This is why we, and indeed majority of sincere people in the South East region find it absolutely benumbing the claim by Governor Umahi that he is protesting against the injustices meted out to the South-East, hence, his defection to the APC.

“We only wish to reiterate that his eventual decamping to the APC has further exposed his known penchant for pretences and hypocrisy, greed and insatiable lust for power. The rest of Nigerians can, therefore, now see that going by his recent vituperations of calling elders his ‘children’, Umahi is a brutal dictator who has no respect, honour and dignity for the next human around him except to use men and women like unserviceable ‘machines’ during the industrial age,” the statement concluded.

Previous: Visit of APC Governors to Jonathan greatly disturbed PDP- APC
Next: APC says Police must fish out killers of its Nasarawa Chairman