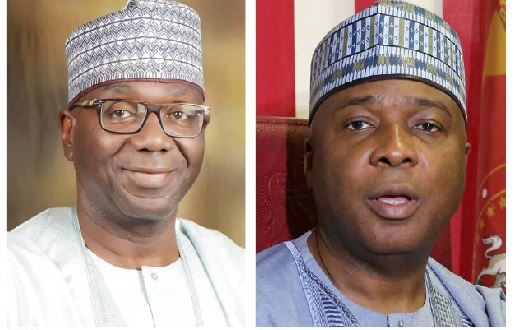 The President, said a source, set up a private investigative committee to examine the circumstances that warranted the demolition and report to him.

According to the source, President Buhari expressed concern about the crisis, which has dominated the media in the last two weeks.

The Nation reports that the former Senate President and his younger sister, Gbemi Saraki, who is the Minister of State for Transportation, had chided Governor AbdulRazaq for the demolition.

The Sarakis said it was an affront on the memory of their father, Second Republic Senate President Olusola Saraki.

But, the state government refuted the allegation, saying the land, which belonged to the state, was illegally transferred to the late politician by the Bukola Saraki administration.

The state government explained that the demolished structures were not meant for residence but a piece of land brought from an Ilorin family for a proposed state secretariat extension by the defunct military administration of Brig-Gen. David Bamigboye.

President Buhari’s intervention was premised on his concern for peace, unity and justice in Kwara, where power shifted from the Peoples Democratic Party (PDP) to the All Progressives Congress (APC) in last year’s governorship election.

Although the source said the President had notified the governor about the private committee, he could not ascertain if he had also informed Bukola Saraki.

The politicians advised the two eminent Kwara personalities to avoid escalation of the dispute trailing the demolition of the building.

Addressing reporters in Ilorin, the state capital, Chairman of the forum, Alhaji Abdukjlkadir Oba Ajara, appealed to Governor AbdulRazaq to toe the path of peace.

He was accompanied by the party’s chairman in the area, Alhaji Baba Akota, and other PDP chieftains in the area.

“I urge our people not to allow self-centred people to turn our state into the centre of violence. We all know what happened in Kogi State. We should maintain decorum. We should not be causing trouble…

“We don’t want Ilorin West to set Kwara ablaze. So, we call on Governor AbdulRazaq to take charge to ensure peaceful co-existence and harmonious relationship in all parts of the state,” Ajara said.

Another group, Kwara Elders of Thought, expressed support for Governor AbdulRazaq for approving the revocation of a piece of land, which hosted the old people’s home.

In a statement yesterday in Ilorin by its Chairman and Secretary, Alhaji Baba Olosasa and Zakary Abdulkareem, the group hailed the governor for taking the action.

“We enjoin His Excellency to rest assured that the progressive-minded Kwarans who championed the O To Ge! (Enough is Enough) campaign in 2018-2019 are solidly behind him in his effort to move Kwara State and Kwarans out of bondage and slavery.

“We have followed the arguments of the parties concerned, and have gathered adequate information on the Ile Arugbo recovery process.

“We also investigated the parties’ claims and counter-claims, and are convinced beyond any reasonable doubt that the Kwara State government, under the leadership of Mallam AbdulRahman AbdulRazaq, had taken the right decision by recovering the property that rightly belongs to the government and people of Kwara State,” it said.