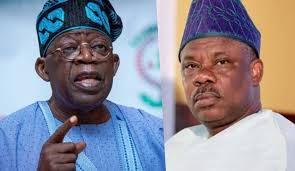 Despite injustice metted against me, I will stand by Tinubu- Amosun

Ex-Governor of Igun State Governor, Senator Ibikunle Amosun, said he would stand with Bola Tinubu and other All Progressives Congress (APC) leaders in spite of the “injustice” against his fold.

The Senator said that he would not stop any of his followers from achieving their political ambitions in any political party they wish.

He said that he would not relent towards ensuring that Tinubu wins the 2023 presidential election.

According to him, no matter issues that arise,Buhari remains his friend, vowing to stay with him till the end of his administration on May 29, 2023.

It will be recalled that  that Amosun’s anointed candidate in the 2019 governorship election in Ogun, Adekunle Akinlade, esigned his membership of the APC, lamenting injustice.

Also, some top  members of the Amosun political camp have also left the party due

Represented by the faction’s APC Chairman, Derin Adebiyi at a political meeting held at the Iresidence of the former Governor, in Abeokuta, Amosun said that those defecting from the party are free to go elsewhere.

Sources at the meeting quoted Adebiyi as saying, “He (Amosun) has sent us to you that he stands with Tinubu, he is loyal to APC. He stands with President Muhammadu Buhari and by the grace of God, on May 29, 2023, he will follow him to Daura and say Alhamdulilah.

“If there is any other step to be taken, it will be a collective decision.

“Now, he said we should tell all of you that whoever loves him and believes in him with all his explanations, such person should stay with him and that he is not angry with anybody.

“Whoever wants to contest in another platform is free to contest, but should not use the name of this group or that of SIA to negotiate. This is what Amosun is saying. This is what he has asked us to tell you.”