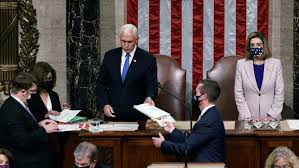 Vice President Mike Pence, today, announced  that President-elect Joe Biden had won the presidency after Congress completed the counting of the Electoral College votes. What was largely seen as a perfunctory last step before Mr. Biden’s inauguration had turned into a day of chaos after an angry mob of rioters stormed the U.S. Capitol in an effort to halt the process.

Congress had to recess for nearly six hours after the angry mob of President Trump’s supporters stormed the U.S. Capitol, leaving four people dead in the melee and sending members of Congress fleeing from the floor during what Senate Majority Leader Mitch McConnell had earlier branded “the most important vote I’ve ever cast.”

According to CBS News, Wednesday, President Trump had encouraged his supporters to “walk over” to the U.S. Capitol as Congress counted the Electoral College votes, the largely ceremonial final step affirming President-elect Joe Biden’s victory. Although Mr. Trump has lately been insisting Vice President Mike Pence had the authority to overturn the election results, Pence defied Mr. Trump on Wednesday and issued a lengthy statement saying he could not change the outcome.

Chaos erupted at the U.S. Capitol a few hours later as an angry mob of rioters — many waving Trump flags or carrying Trump gear — breached the building.

D.C. Metro police said one woman was shot and killed by police and three people died from medical emergencies. More than 52 people were arrested, with 47 of those arrested for curfew violations.

Mr. Biden gave a speech in Delaware denouncing the violence and called on Mr. Trump to address the nation. Mr. Trump then posted a one-minute video to Twitter, telling the rioters they are “special” but they “need to go home now.”

Congress reconvened nearly six hours later after leaving the floor, taking up where it had left off in hearing the objection from Senator Ted Cruz and Congressman Paul Gosar to Arizona’s electoral results. The Senate rejected the objection 93-6, and the House rejected it 303-121.

Despite calls from more than a dozen senators who said they would support objections to electoral results in key states, no senators signed onto House members’ objections to the results in Michigan and Nevada.

But Senator Josh Hawley followed through on his promise to object to Pennsylvania’s results. The Senate rejected it 92-7, leaving the House to debate it for two hours before it was rejected after 3 a.m.