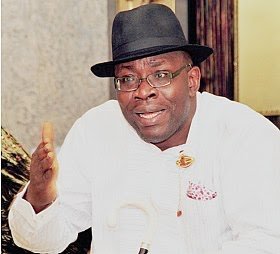 Bayelsa State Governor-elect, David Lyon, has raised the alarm that Governor Dickson is making last-minute transactions to compound the financial woes of the state ahead of the February 14, 2020 handover.

Lyon in a statement signed by his Acting Media Adviser, Chief Gift Ebiki, warned and advised banks and other financial institutions to henceforth desist from issuing financial aides such as loans, overdrafts and other forms of credit facilities to the outgoing Governor, Seriake Dickson and key figures in the administration.

He said such credit facilities aimed at crippling the financial base of the state to make effective takeover of the All Progressives Congress (APC) government difficult should not be extended to unverified projects being carried out by the outgoing administration.

He called on the Independent Corrupt Practices Commission (ICPC) and the Economic and Financial Crimes Commission (EFCC) to beam their searchlights on the activities of the outgoing government to forestall corrupt practices and looting of state treasury.

Lyon specifically asked managing directors of 22 banks to stop such further transactions in the collective interests of the people of Bayelsa adding that financial institutions should exercise a duty of care to the long-suffering people of the state.

Read Also; A season of ‘Lyions’
The statement said: “These institutions are warned that such applications and requests, hurriedly made as the curtain drops on this administration should be dishonoured in line with sound internal control and governance principles.

“This warning comes as the transition arrangements are showing desperate steps being taken by top officers and key figures of the outgoing administration to compound the already worrisome debt profile of the state and to cripple the finances of the state by questionable transactions, payments, credits and disbarments.

“Anti-corruption agencies are also hereby put on alert to watch the government accounts and transactions of these key figures to forestall corrupt practices and looting of the treasury of the state.

“These institutions are finally reminded of their duty of care to the long-suffering people of Bayelsa and to refrain from baking any steps that will frustrate the good plans of the incoming administration”.