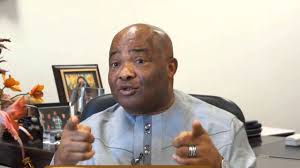 Imo State Governor Hope Uzodinma has said that opposition politicians and disgruntled personalities have been encouraging insecurity across the country.

Uzodimma told State House reporters after meeting with President Muhammadu Buhari at the Presidential Villa, Abuja, that he alone cannot guarantee security in his troubled state.

He said other stakeholders, including monarchs; religious and political leaders must engage more with the people to restore peace in the state.

According to him, former political office holders who fail to speak out against the activities of trouble makers have questions to answer.

He said condemnation of the unwholesome activities of those destabilising the country by the elite would have changed the narratives.

He, however, noted that those destroying public property must be ready to face the consequences.

Noting that he was in Villa to brief the President on developments in his state, the governor admitted that Nigeria was going through trying times.

He said: “It is not only in Imo State, I didn’t limit it to Imo State. I am saying that cases of insecurity here and there in the country have not been helped by the posture of opposition party and some aggrieved politicians, the reason being that at a time like this in Nigeria, anybody worth his onions as a leader should be able to speak out.

“How many of them are speaking out? How many of them are condemning what is going on? Rather, what you see are leaders fanning the embers of insecurity, blaming only government. We must be tired of this blame thing by now and then contribute our own quota towards ensuring that national security is not threatened in the country.

“So, it is not something for politics. It’s something that if you are a former Senate President and you are a former speaker, or a former deputy senate president, or a former deputy speaker and things like this are happening in the country and you are not able to speak out and we’re not seeing you where you are engaging in addressing the young men and women in your area on the need for a united Nigeria and this is a country that has given you opportunity to serve at that level one time or the other, then it is either overtly or covertly, you have a question to answer.

“At this point, we’re not dealing with feelings alone; we must tie feelings to national interests. It’s not about sentimental feelings, it’s about knowing that this is a federal government asset and you woke up willingly and deliberately go there to destroy, what you are trying to destroy is the sovereignty of the country and we shouldn’t encourage that.

“So, let us not pretend as if all is well, all is not well, leaders must rise to ensure that they work hand in hand with government to ensure their security in the country.

“Have you seen a situation where people will wake up and take buses to school and then load 200 students, you can imagine how many buses that will take 200 students and drive them away to somewhere and they will be asking for ransom, what type of society is that?

“This is not the society we used to know. We should all be worried and not only be worried, or to sit down and begin to blame government or blame, Mr. President, we should all get involved.

“You have heard how people will come from outside the state in the name of unknown gunmen. I don’t know when we will begin to know this people and they will commit atrocities, and they will now flee.

“So, these are the things. I want to use this opportunity to invite all leaders; religious leaders, political leaders, community leaders, traditionally institutions, to join hands, because the only country we have is this Nigeria, we don’t have another country and if we’re not united we will achieve nothing.

“We must contribute our quota, however it is, to ensure that Nigeria remains a strong and united, a place that we will go about our businesses, equity and justice is guaranteed and then we have a country.”

Uzodimma said: “Of course, not just in my state, everywhere in Nigeria there are security breaches here and there, of course Imo is not left out. We are doing our best. So far, the situation is relatively okay in Imo State than it was.

“Imo is okay now; people can come around and do their businesses. The normal live and activities have resumed in Imo; security agencies are on top of the situation.”

He went further: “It is not only in Imo State that we have had the challenges of insecurity, there is insecurity in other states. In fact, I can even tell you that Imo’s case is better, apart from one or two cases that involved very important personalities.

On the reported resignation of Ebube Agu chairman Maj.-Gen. Obi Umahi, the governor said he was yet to speak with and therefore could not comment yet.

He said: “As I speak to you, I have not seen any letter from him and therefore I cannot say that he resigned. However, I am aware that the thing has dragged for some time. I don’t know if it’s the reason, but I really want to speak with him to confirm the information before I can comment on it.”.