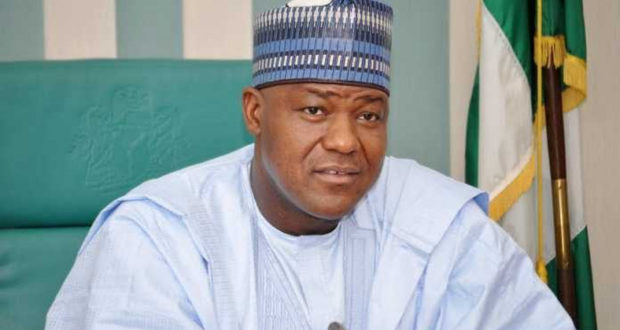 Dogara flays Tinubu, says he is pursuing fascist agenda to control all levels of power

The Speaker of the House of Representatives, Yakubu Dogara, has descended on a National Leader of the All Progressives Congress, APC, Bolaji Ahmed Tinubu.

According to Dogara, the former Lagos Governor was pursuing fascist agenda to control all levels of power in Nigeria.

Dogara, in a statement signed by his Media Aide, Turaki Hassan, on Tuesday, said that only the ignorant with dubious academic certificates will say the maker of a document has padded the document that only he can constitutionally make.

Recall that Tinubu had earlier accused Senate President, Bukola Saraki and Dogara of having padded the country’s budget for four years.

Dogara’s statement added, “We have noted the statement issued on April 21, 2019 by Asiwaju Bola Ahmed Tinubu wherein he stated his reasons for sponsoring or supporting some aspirants to various leadership positions in the forthcoming 9th Assembly. Ordinarily, this would not have elicited any response from His Excellency, the Speaker of the House of Representatives, Rt Hon Yakubu Dogara, as Asiwaju is entitled to sponsor those he believes will have no choice but answer to his dog whistles anytime he blows same in his capacity as the self acclaimed National Leader of his party.

“If Asiwaju had confined his intervention to stubborn facts, this response would not have been necessary. He, however, used the opportunity to manufacture falsehoods and paint a non-existing picture of the stewardship of Mr Speaker and the work of the 8th House of Representatives under his watch. It is therefore, incumbent on us to set the records straight for posterity.

“Asiwaju Tinubu accused the leadership of the National Assembly of stymieing ‘the APC legislative initiatives while attempting to hoist noxious reactionary and self interested legislation on the nation.’

“He said further: ‘Just look at the way Saraki and Dogara and their ilk hijacked the Budget Process these past four years. National budgets were delayed and distorted as these actors repeatedly sought to pad budgets with pet projects that would profit them”.

“He continues ‘Even worse, they cut funds intended to prosper projects that would have benefited the average person. After four years of their antics halting the progress of government, we should do all we can to prevent a repeat of their malign control of the National Assembly.’

“He generously used the usual unexplained words like installing a progressive leadership and so on.

“We do not expect Asiwaju Tinubu to dwell on brazen mendacity, much less murder facts and decorum in his rabid bid to justify his patently clear fascist agenda of controlling all levers of power in Nigeria. Asiwaju Tinubu’s nocturnal agenda has no parallel in the history of any democracy and it is more loathsome when he throws caution to the winds and maligns government officials who are doing a yeoman’s job of stabilising the government of President Muhammadu Buhari, even in spite of political differences.

“It is on record that the Rt. Hon. Speaker has done more to stabilize this government more than Asiwaju Tinubu and his ilk whose stock in trade is scheming, manipulation and subversion especially when they feel they cannot be caught. When the history of Buhari’s administration is written by those who know the truth of what really transpired in the last four years, Asiwaju’s pretentious loyalty to President Buhari will then be exposed. We won’t say more but no matter how long it may last, the truth will one day overtake lies. Perhaps, Asiwaju is still bitter about the leadership contest for Speakership of the 8th Assembly, even though the actors have moved on culminating in Speaker Dogara magnanimously facilitating the appointment of his opponent in the race and Tinubu’s protege as House Majority leader.

“The chief cause of delay in enacting the budget is the persistent refusal or neglect of the Executive to present it in good time.

“As if the late or delayed submission of budget estimates wasn’t enough, in most cases, Ministers and heads of agencies contributed to the so-called delay by consistently refusing to appear before National Assembly Standing Committees to defend their budget proposals in line with the provision of the Law. At some point, the leadership of the National Assembly had to take up the issue with the President who advised his Ministers to honour legislative invitations to defend their budgets.

” What Nigerians don’t know is that the Executive, through the various Ministries, continued to propose additional projects to be included in the 2018 budget even as at April and May of 2018 which further delayed the passage of the 2018 budget. These were communicated officially and if anyone is in doubt, we will exhibit the letters with the dates they were written and received. In any case, the National Assembly inserted a clause in the Appropriation Bill consistent with S.318 of the Constitution which allowed the Budget to last for 12 months after Mr President’s Assent. This enabled the Executive to spend more of the capital component of the Budget as it still had 12 months protected by law.

“As an activist legislature, the National Assembly effected an amendment to S. 81(1) of the Constitution to compel Mr President to present the Budget estimates not later than 90 days to the end of a financial year in order to solve this problem but unfortunately, very unfortunately, Mr President declined assent to the bill which was passed by both the National Assembly and over 2/3rds of the State Assemblies.

“The National Assembly made a further attempt to make the Budget process much better by improving the institutional capacity of the Parliament to process and pass National budgets by passing the National Assembly Budget and Research Office (NABRO) Establishment Bill into law. It was loosely modelled after the American Congressional Budget Office (CBO). Again, Mr President declined assent to the Bill.

“It is important to emphasize that the National Assembly is not a Rubber Stamp Parliament and reserves the right, working cooperatively with the Executive to interrogate projects unilaterally inserted by the Executive branch without the input of or consultation with Parliament. The legislature cannot be accused of padding a Budget it has unquestionable constitutional power to review.