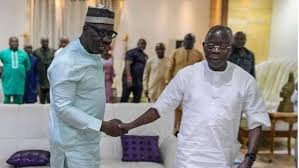 A chieftain of the All Progressives Congress (APC) in Edo State, Prince John Mayaki, has warned Governor Godwin Obaseki  not to blame former APC National Chairman, Comrade Adams Oshiomhole, for another four years of failure.

He blasted Obaseki and his party, PDP, saying that they are suffering from  delusionary obsession with Oshiomhole.

He also re-echoed his  calls for the governor to explain his alleged reckless loans.

Mayaki statement follows the accusation made by the PDP Publicity Secretary, Chris Nehikhare, accusing him of acting as Oshiomhole’s mouthpiece over plan by Obaseki’s Government to obtain N18bn loani

He said: “Obaseki and his party of tax-collectors must seek cure to their delusionary obsession with Comrade Oshiomhole. I have not seen Oshiomhole since last year’s election, and I cannot be said to be speaking his mind on any matter.

“For four years, Obaseki sang the name ‘Oshiomhole’ like a broken record, and made it his default response to questions asked on his failure to pay salaries, build modern and durable infrastructure, and secure the lives and property of Edo people since his tragic emergence in 2016. He cannot do that again for another four years.

“Rather than distract from the real issues with a needless focus on name-calling, it is important to re-establish the fact that Obaseki is mortgaging the future of Edo with reckless borrowings that lack mandatory legislative approval, as recommended by the constitution, and a transparent account of spending for independent checks and verification.

“It is shocking that less than a month since the governor secretly obtained N25 billion loan, he has returned to the market to shop for another N18 billion, without providing an account of how he spent the N25 billion or a defence of the additional borrowing. This is a perversion of democracy and must be condemned.”

Previous: 2023 Presidency: Niger State lawmakers declare support for gov Yahaya Bello
Next: Why Igbos are insisting on having Biafra- Adebanjo