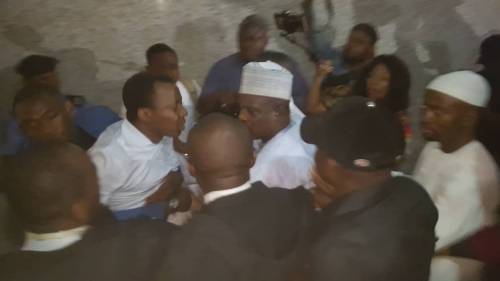 An NGO, Advocacy for Advancement of Peace and Harmony in Africa Initiative (ADAPHAI) has kicked against the Friday invasion of the Federal High Court, Abuja, saying such abomi act is a threat to Nigeria’s democracy.

The group maintained that the political class, by this development showed that it has learnt nothing about tenets of democracy in the last two decades of civil administration, as it berated President Muhammadu Buhari and the ruling All Progressives Congress (APC) over the incident.

ADAPHAI, in a press statement signed by its National Coordinator, Comrade Sulaimon Suberu, a copy of which was sent to newsmen on Monday added that Buhari and APC by their body languages see nothing wrong with such “democratic infraction “, Daily Post reports.

It averred that the temerity displayed by operatives of DSS to invade an open court and behave in a manner that could cause serious chaos within the court premises suggests the level of incivility that has eaten deep into the fabric of Nigeria’s security architecture.

The group further lashed out at the secret agency, saying the organisation lacks decency and professional standard, citing the revelation of Sowore’s counsel, Mr Femi Galena, and the press release signed by DSS’s spokesperson, Dr Peter Ifunnaya on what transpired in the court on Friday.

ADAPHAI said: ” While DSS has not come out to refute Falana’s claim on how the presiding judge summoned the head of the team that invaded the open court, in which the fellow was said to have apologised, the subsequent narrative of the agency, which was signed by its spokesperson utterly confused every discerning Nigerian, and portray the secret agency in a very bad light.

“We are indeed taken aback by the desperate efforts to rationalize and justify the unfortunate incident of Friday by the presidency and of course DSS, despite the video that has gone viral globally and with attendant bashing and odium it continued to elicit.

“Also, the reaction of the United States Department of Democracy, Human Rights and Labour, warning the Nigerian government on Omoyele Sowore and against any move that could undermine democracy is instructive as it is pathetic.

“As an organisation with the mandate to propagate peace and non-violent culture in Africa, we are worried by the spate of this democratic infraction and flagrant disrespect to rule of law by APC-led government and it’s agencies, which regrettably threatens National peace and cohesion.

“This turn of events, obviously becoming disheartening and disappointing, considering the image this present government created for itself at the inception of this dispensation”.

The group has also appealed to international and regional organisations of democratic inclinations to intervene and caution President Buhari against Human Rights violations and actions that threaten rule of law and democratic governance.

It observed that Nigeria, being the biggest factor in Africa deserves special attention from leading democratic nations as well as international organisations.