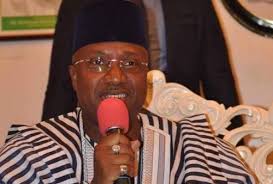 The ex-governor, who admitted that he was invited and interrogated by the DSS, said he “cautioned members making those unwarranted utterances thrice” at the meeting.

But the invitation has generated political tension in Adamawa following the leakage of an audio tape of the meeting.

It was learnt that Bindow was grilled at about 2.50pm yesterday on alleged plot against the President on account of an audiotape in circulation.

The ex-governor last week convened a meeting on the way forward for the APC in Yola South in Adamawa Central Senatorial District as part of his preparations for another governorship bid in 2023.

It was gathered that the meeting had hardly started when some of those invited started pouring invectives on President Buhari.”

The outbursts against the President became intense. One of them at the session secretly recorded the discussion.

Previous: I am not plotting to return as APC Chairman- Oshiomohle
Next: Enugu APC crisis gets worse as police seal office