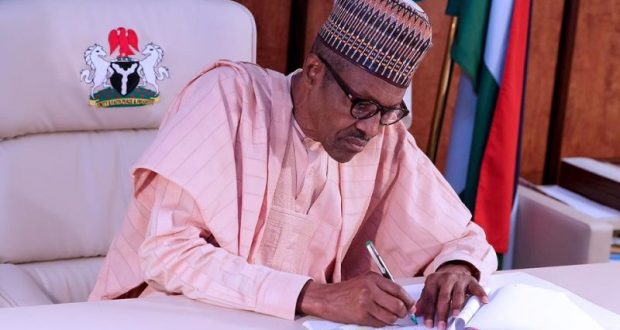 More individuals and political groups are stepping up to show support for a second term for President Muhammadu Buhari.

Ebonyi State chapter of the All Progressives Congress (APC) , says it will support the re-election of the President.

This is according to its Acting Chairman, Eze Nwachukwu.

Nwachukwu who made the declaration on Thursday in Abakaliki, said the party took the decision after close assessment of the achievements of the present Administration especially on job creation, economic revitalisation, agricultural revolution and war against corruption.

According to him, it is natural for the party to back Buhari, so as to consolidate on the gains so far achieved.

The Ebonyi APC Chairman said further that the National leadership of the APC should prevail on the President to go for a second term.

“We have assessed the achievements of the present Administration and have come to an undeniable truth that the President has done so much in areas of physical infrastructure, the war against financial graft, job creation, economic repositioning among others.

“It is only natural that the President is given another opportunity to consolidate on the gains so far made in enthroning genuine democracy and putting the nation’s economy on the path of economic growth.

“We are going to mobilise both party and non party members to support Buhari for second term.

“Ebonyi belongs to APC and I am saying that APC will take 100 per cent of votes cast for the Presidential and governorship polls and we are going to prove this fact in 2019.”

Previous: PDP raises the alarm on plot by EFCC to arrest its members on fake charges
Next: INEC registers 104, 805 new voters in Bayelsa