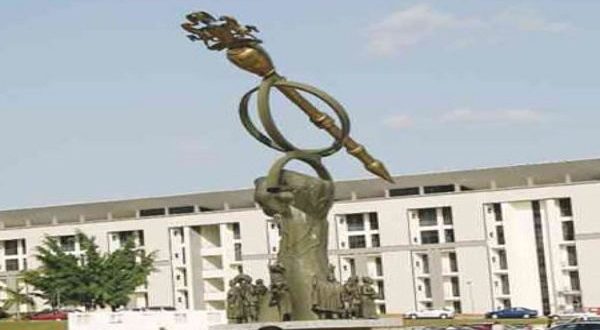 This followed a motion of urgent public importance moved by the House leader, Victor Chukwu and seconded by the member representing Ohaukwu North, Chinedu Awoh, The Nation reports.

Chukwu also moved a motion that the Chairman of Ohaukwu Local Government Area, Clement Odah, be suspended alongside the lawmaker.

He said the motion stemmed from the findings of the ad hoc committee set up by the House to investigate the financial activities of Ohaukwu Local Government.

The leader said findings of the committee indicted both Aleke and Odah, and that there was need for the House to sanction them to serve as a deterrent to others that might indulge in similar acts in future.

Chukwu said the committee discovered a lot of financial improprieties, including inflation of contracts sum allegedly by Odah’s administration, which according to him, shouldn’t go unpunished.

He alleged that Aleke who was a member of the committee became a’a green snake in a green grass’, by allegedly conniving with Odah to sabotage the assignment; an act he said was against the House rule.

Chukwu said Aleke had “committed other infractions in the past which he described as not just dishonorable, but breaches the peace of the House, adding that such should not be overlooked any longer.

He urged the House to suspend both Aleke and Odah pending when the determination of the allegations against them.

But the motion for the suspension of Odah was stepped down by the Speaker, Rt. Hon Francis Nwifuru, who said it would be discussed during the next plenary, while Aleke’s was upheld.

Meanwhile, there was a mild drama as the member representing Ezza South State Constituency, Hon Chris Usulor, opposed the Speaker.

He requested that there should be headcount of the lawmakers at the plenary to know those in support or against the suspension of Aleke, before he makes his ruling.

But Nwifuru quickly told him that his request was against the House rule.

Aleke was not present in the chamber when his suspension took place on Friday.

On whether the suspension of Aleke had any connection with his alleged refusal to decamp to the APC with Governor Umahi, the Chairman, House Committee on Information, and Member representing Ishielu South, Hon Arinze Chukwu, said it had nothing to do with defection

Previous: All pending bye-elections in 11 States to hold in Dec 5
Next: Pro-Trump’s protest rocks Washington as President insists on electoral fraud