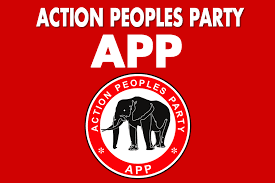 Scores of party members of the Action Peoples Party (APP) in Ebonyi State have dumped the party for the Peoples Democtic Party (PDP).

The intimation was made known to the public by the Chairman of APP, Joshua Chinedum Elekwachi, on Tuesday in Abakaliki,

According to him, he and other members decided to romance PDP because it is the only party that reckons with the masses in Nigeria.

He told newsmen that the PDP is the only political party that truly resonates with the masses, not only in Ebonyi but nationwide.

He added that joining PDP would make him play a role rescuing the state from the grip of mercantilist politicians .

He also criticized the the government of President Mohammadu Buhari, saying that the state of the nation is currently terrible under him.

“I am moving to the PDP together with all the members of the State Working Committee, SWC, of APP, all local government and Ward executives and over 20,000 registered members. Therefore, today, being Tuesday, 17 November 2020, the entire APP structure is hereby collapsed into the Peoples Democratic Party, PDP.”