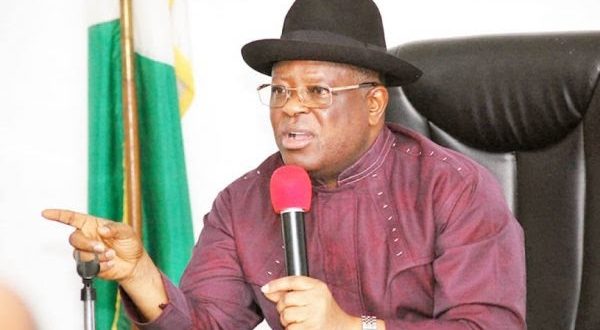 Ebonyi Politics: Gov Umahi, aides harrassing me because of my membership of APC- Ex-Commissioner

Ex-Commissioner for Information in Ebonyi State, Abia Onyike, has cried out that Governor David Umahi’s aides deliberately harassed him because his membership of the All Progressives Congress (APC).

He said his membership poses threat to the governor’s political fortunes in the state.

“It is important to let the world know why the Caretaker Chairman of my LGA is being used for this partisan politics- yeoman’s job. Since I left PDP and declared for the APC and ensured that my ward was delivered to the APC; neither the governor nor PDP Ebonyi State has rested. The worst hit has been the leadership of PDP in the entire lga and the ward,” he said.

Onyike made this allegation after Umahi’s order, on Thursday, June 11, 2020, in a live broadcast in Ebonyi, that security agencies should isolate and quarantine Onyike who he said is a suspected COVID-19 patient.

Reacting through a statement, Onyike said the governor’s order was based on a letter issued by the Caretaker Committee Chairman of Afikpo South LGA (Onyike’s LGA), adding, “I wish to state that I will not be comfortable with any test being conducted by Umahi’s agents in Ebonyi State as the governor and his brother, Austin, had threatened to kill me.

“Governor Umahi thinks he can silence us from celebrating democracy. Where was he when some of us were confronting the Nigerian military under the banner of pro-democracy movements to return Nigeria to democracy, after the annulment of the June 12 election?”

Giving example of the most recent harassment, Onyike said: “On Tuesday, the 9th of June, 2020, I was part of a three-man panel of discussants, invited by Dream FM Radio in Enugu to analyze the issue of Leadership and Democracy in the South-East geopolitical zone, as part of the celebration of 21 years of uninterrupted democratic governance in Nigeria. In the one- hour programme, I took time to dissect, analye and criticise Governor Umahi’s oppressive, dictatorial and lawless government in Ebonyi State. I accused the government of nepotism as Umahi had converted the state to a private family dynasty.

“After the programme, I returned to Abakaliki and was confronted the same day by Mr. Austin Umahi, the governor’s younger brother who is the National Vice Chairman of the PDP. He sent a message to my WhatsApp and threw caution to the winds by calling me names amidst other unprintable and derogatory comments, and sought to know why I criticised his brother’s government? Later on, he called me on the phone and threatened my life, saying that they were going to kill me.”