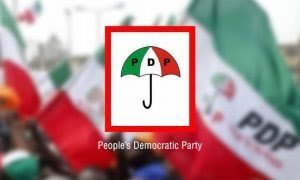 The Ebonyi State Chairman of Peoples Democratic Party (PDP), Mr Onyekachi Nwebonyi, has rejected the dissolution of  the party’s executive Committee in the state

Reacting, he claimed that  the state exco of the party is still alive  will not be devolved in the next four years.

Speaking further, he said that the mandate of four years given to him is four years and has not expired, noting that he was not appointed by the National body of the party.

The PDP NWC had on Tuesday evening dissolved the Ward, Local Government, and the State Executive Committees of PDP in the State.

“We are in charge of the party in the state for the next four years having been duly elected for a four-year term and our tenure will elapse in 2024 and nobody has the power to dissolve the state executives.

“The action of the national working committee of the PDP in dissolving the ward, local government, and the state executive committees of the party in the state is laughable because the governor and few individual want to leave the party.

“We were duly elected in line with the party’s constitution and any action on the state executives must conform with the provisions of the PDP constitution,” he said.

Nwebonyi lamented that some key members made fruitless efforts to dtop the governor’s defection.

“The governor had planned to ceremonially join the APC but our efforts to get him reconsider the move made him to put it on hold hitherto,” he said