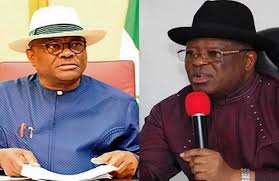 Ebonyi: Wike a garrulous and pompous person, but poor in governance- APC

It will be recalled that the Rivers Governor had , threatened that the Peoples Democratic Party would pursue the case of Umahi’s defection to the All Progressives Congress up to the Supreme Court.

Reacting, the Ebonyi State APC Chairman, Chief Stanley Okoro-Emegha, stated, “The attention of the Ebonyi State chapter of the APC has been drawn to the reckless outburst of the Governor of Rivers State, Nyesom Wike. The governor was reacting to the very unjust and widely condemnable Federal High Court ruling, which recently sacked Governor Umahi and his deputy, Dr Kelechi Igwe.

“After listening to Wike’s reckless tirades against Governor Umahi, which is very characteristic of him, the Ebonyi State APC feels obligated to reply to the garrulous, highly pompous but poorly performing Rivers State governor, and to place him where he rightly belongs. This is more so given that he has achieved nothing other than violence, turbulence and destruction of people’s hard-earned property ever since he became the governor.

“Nigerians are very much aware that there is no comparison between the widely-rated performing David Umahi and the power-drunk Nyesom Wike in any area, as Governor Umahi clearly surpasses the sleeping governor of Rivers State in all indexes of performance, both in private life and public service.