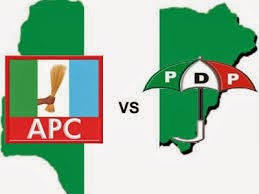 Governor Godwin Obaseki of the Peoples Democratic Party (PDP) and Progressives Congress (APC) candidate, Osagie Ize-Iyamu, have been engaging in war of words over campaign funding.

Obaseki, through his Special Adviser on Media and Communication Strategy, Crusoe Osagie, on Monday alleged that crisis had hit the camp of Ize-Iyamu over funding.

The governorship candidate of APC, through the Director of Communication and Media of his campaign organisation, Prince John Mayaki, urged well-meaning people to ignore the propaganda of Obaseki and his media aide.

Governor Obaseki said: “A source familiar with the crisis said Ize-Iyamu’s campaign team is battling cash crunch, as a prominent Benin billionaire, who has been funding his campaign, has developed cold feet on the advice of his associates, who are of the view that the Ize-Iyamu governorship project is high risk.

“No one is certain about Ize-Iyamu’s candidature. The way he joined the APC and emerged the standard-bearer is still being debated among his lawyers and close associates.

“In fact, a close friend of Ize-Iyamu told him that the ticket he has, is but a receipt for a black-market transaction that will not survive the scrutiny of the courts, even if he wins the election, because there are fundamental issues with the way he joined the party and emerged the standard-bearer