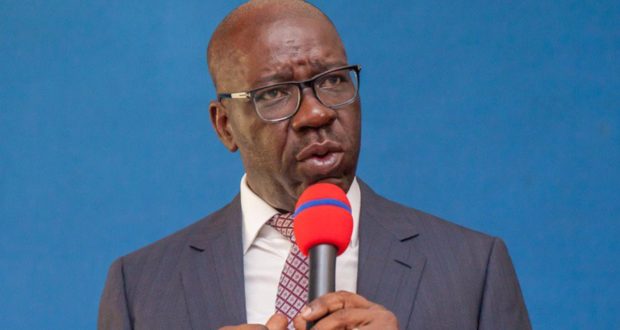 He described him as a dictator who undermined democracy in Edo State by preventing the swearing in of 14 members of the House of Assembly.

Tinubu said the electorate should reject Obaseki’s bid for second term the way he rejected the 14 legislators.

“Like he rejected the 14 members of the House of Assembly, reject him at the polls,” he said in a television interview.

The former Lagos governor urged voters to shun violence and maintain peace during the exercise.

Recalling that Obaseki rejected entreaties by the National Assembly and the Federal Attorney-General to allow the lawmakers take their seats, he said anyone who could stifle democratic growth does not deserve the “democratic ballot paper.”

Tinubu said it was lamentable that Obaseki vandalised the House of Assembly by removing the roofs and blocking its entrance with gravel to prevent the inauguration of the 14 members.

He said: “I want to appeal, as a committed democrat, and leader of all democrats, regardless of political parties, to our conscience and our commitment to democracy today, on the forthcoming election in Edo State.

“I want to appeal to you to reject Godwin Obaseki in this coming election. I have suffered with many others to bring out this democratic regime we are enjoying today in the country. Then, Godwin Obaseki didn’t participate in any aspect of the struggle to enshrine democracy in this country. Therefore, he could not understand the value and the pains that were associated with the democratic struggle.

“He was elected governor by you great people of Edo State because he presented himself to you as a democrat and he was sworn in after winning the election.

Tinubu added: “Today, he now comes to you, wanting you to vote for him. Please, I appeal to you; reject him. Several institutions and leaders across the country appealed to him to respect constitutional democracy. But, he rejected all entreaties. He rejected the appeal by the National Assembly and the Attorney-General of the Federal Republic of Nigeria, who enumerated the path of honour and constitution of the country.