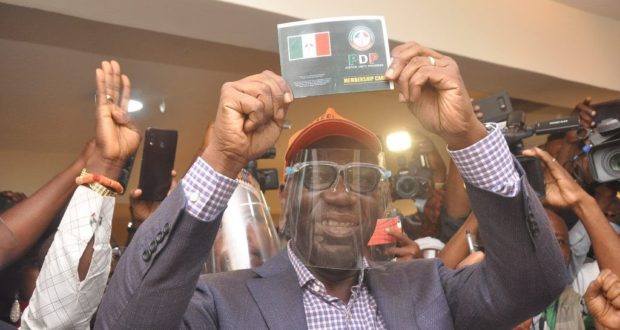 The Edo Diaspora Group has said that they would rally round Governor Godwin Obaseki of the Peoples Democratic Party (PDP) so that he will win September 19 governorship elections.

It said Obaseki would be victorious because of superb performance.

The group yesterday kicked off its campaign for Obaseki’s re-election with rallies at markets in Benin.

The body, through its spokesman, Stanley Osakhuenorkhodin, speaking at Aduwawa market, said Obaseki’s impressive performance would endear him to the electorate.

It said: “The umbrella body that covers Edo people in the diaspora will deliver Obaseki. We will ensure our campaigns continue until we hear the final whistle, because we are aware that some persons from the other divide, who know that they are no longer enjoying the support of Edo people, believe they can only achieve their aim through rigging.

“Some of them are already boasting that they will deploy federal might. President Muhammadu Buhari has promised that he will adhere to the rule of law. Regardless of whatever they want to do, we will confront them and deliver Edo State for PDP. We will stand firm. We will not just vote on September 19, we will also defend our votes. Our goal is to ensure that Governor Obaseki and Comrade Shaibu return to power.

“Today (yesterday), we decided to hold rallies in support of Governor Obaseki. You can see the crowd, despite that we adhered to the COVID-19 protocol. We are tired of ‘godfatherism’ in Edo State. We are tired of people who have refused to adhere to the truthful statement expected of them.”

The group urged the electorate to vote for Obaseki on September 19, to enable him consolidate on his administration’s achievements.

Previous: Obaseki will not escape disgrace, he will be shocked- Ganduje
Next: Why we didn’t cave in to pressures to declare Kalu’s seat vacant- Lawan